Method books are important to anyone working to master an instrument, whether they are beginners or professionals. There are many such books for the flute and we have featured reviews of many of them — a list is given below — and we will continue to do so.

In recommending method books, however, it is important to distinguish between two main categories. The first constitute courses of instruction, usually utilised by a teacher with each student. that take them through their first steps as beginners to more advanced levels of accomplishment. 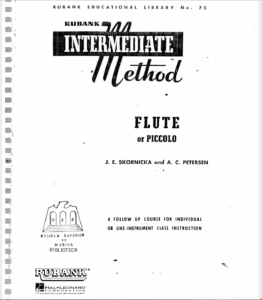 In my own teaching, in spite of many new method books being published, I keep coming back to the original Rubank series that I have used for years. Published by Hal Leonard out of Chicago in 1939, it has four levels, Elementary, Intermediate, Advanced, Volume 1 and Advanced Volume 2. Each book has progressive exercises to improve technique in sound production, trills, scales, short performance pieces, etc. and each volume has an accompanying volume of solos and duets for the student, the duets presumably for student and teacher together. It is rigorous, no-nonsense, and, unfortunately, out of print, but I keep searching the used book stores for copies, and they are also available in digital form. Publishers keep sending me more recent publications to review and I continue to disappoint them. (If there are any teachers who have found something better, please write me at flutejournal21@gmail.com.)

The nature of this kind of method book is that the student tends to approach them as a course of study, so that, as each book is completed, it is usually discarded in favour of the next volume. By contrast, the second category of method books are intended to become a permanent part of a flutists library, something that one refers to throughout one’s career as practice becomes self-motivated and directed towards maintaining and improving technique in every area. Accompanied by the scores needed to keep one’s repertoire growing, these volumes provide the material needed to address any problems that may come up, areas that need improvement, but not as a graded course so much as what is described as a “. . . reference guide for players who are looking to overcome technical difficulties, and who are seeking advice on how best to practice.” 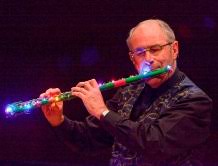 This description is found on a volume that amounts to exactly that. Distinguished British flautist Trevor Wye has produced an extensive library of method books over his long career and these include a six volume series, covering: 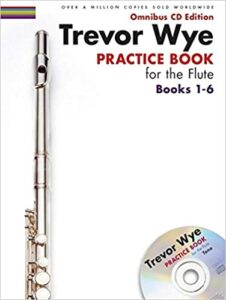 Now these volumes have been incorporated into an omnibus edition, resulting in one book, The Trevor Wye Practice Book for the Flute, Books 1-6, that, according to the publisher,     “. . .  is invaluable for both amateur and would-be professional players.” It is hard to argue with that. As separate volumes it has already sold over 1 million copies and it is not hard to see why. Prof. Wye is nothing if not thorough. Outside of extended techniques, Prof Wye covers every aspect of flute technique with supporting information from theoretical sources where needed, and exercises to develop each area — scales, arpeggios, snippets, compositions . . . It is all there, including, for example, much-needed explanations about the harmonic series and different tuning systems at the beginning of Book 4. This vital information is omitted far too often from both practice books and class instruction, but not from Trevor Wye’s curriculum. And there are other examples throughout. If cast away on a desert island with a flute and just this book, one could still make progress to a high level of performance, (especially if Man Friday turns out to be a flute repair man!)

Of course there are other books that also belong in your library if you manage to avoid that desert island. So, to be thorough, I wrote to Prof. Wye as follows:

“I conclude that the book is not intended as a method book for students to follow systematically over time until they move on to more advanced studies. Rather, as with the Marcel Moyse studies and others, it should be part of a flautist’s permanent library they can turn to from time to time.”

“Yes, you are right. They are books to refer to when there are technical, tonal or intonation difficulties, though students often don’t know they have them! So they should be worked through in conjunction with whatever method books they use.
Other method books I recommend are the Taffanel and Gaubert method books, Andersen opus 15, Boehm 24 Studies and of course, the Moyse 24 and 25 Little Melodious Studies.“
In our effort to help our readers build a good library, we will look at these other method books shortly. We have already reviewed a number of these in different categories. A list appears below.
In the meantime, the Trevor Wye Practice Book will be an excellent place to start.

A) General — Designed to bring about mastery of the flute itself

Liz Walker – Baroque Studies For A) Baroque And B) Modern Flute

Conrad Cork — The New Guide To Harmony With LEGO Bricks

Bill McBirnie – The Technique And Theory Of Improvisation

C) World Music — again, for those with a basic mastery of the instrument