Flutists of the World Against War and Aggression — Ukranian Medley
May 16, 2022 (No Comments) by Ganved14

FLUTISTS OF THE WORLD AGAINST WAR AND AGGRESSION

* This piece was written by award-winning American composer Eugene Magalif who is noted for compositions in a variety of different genres. His work been featured on radio and TV in Europe and the USA, performed and recorded by soloists and orchestras globally, at prestigious festivals and concert halls such as Carnegie Hall and the White House in the USA, Rachmaninov Concert Hall in Moscow etc. 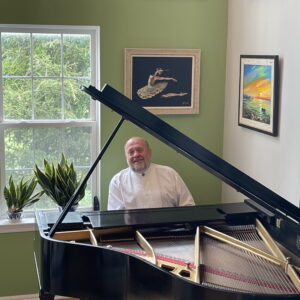 In 2016, Magalif was a guest composer at the Sir James Galway Flute Festival in Switzerland. Collaboration with Galway led to Magalif’s music being featured in a new series, Galway Presents, by Keiser/Southern Music (USA).

In 2016, soloists from five different countries were featured on Magalif’s recording Colibri with the Dnipro Philharmonic Orchestra (Ukraine). The album, named after the composer’s most known work for Flute and Orchestra, received three medals at the Global Music Awards  San Diego, USA. In October 2016, the Flute Concerto won in Modern Instrumental Music category at the Akademia Music Awards, Los Angeles, USA. In 2018, Flute Concerto won the Newly Published Music-2018 competition (USA). The same year, the International Competition for the best performance of the Flute Concerto had great success.

In 2020, flutist A. Haskin recorded a double album Encore with music of Magalif. The composer has now created Ukrainian Potpourri in support of Ukraine. The recorded video features 32 flute players from 23 countries. This unique project has been widely covered by the US and European media.