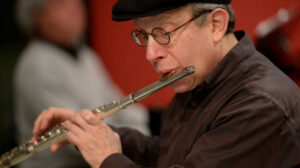 As for the performers, it would be difficult to find a more distinguished group, most of whom have previously appeared on Flute Journal. The recital opens with Paul Taub performing pieces by two American composers, Barbara Benary and Lou Harrison, both of whom were very interested in Asian genres such as the Javanese or Indonesian Gamelan,  Sadly, Paul Taub passed away in March. An obituary and memorial will follow shortly. Meanwhile, Taub‘s performance of Harrison‘s Air in G Minor here is rather special for your editor as, many years ago, the composer sent me a hand written copy of this piece, and it has been a treasured part of my own performance repertoire since then.

Following Paul Taub, the recital features music from South America performed by a flutist who has long specialised in this area. Stephanie Jutt plays compositions by Argentina‘s Alberto Ginastera and Raimundo Pineda from Venezuela.

Next, Lisa Bost-Sandberg demonstrates her expertise with contemporary music. She performs Luciano Berio’s Sequenza 1, followed by  her own composition When it Rains / The River Stands Still. 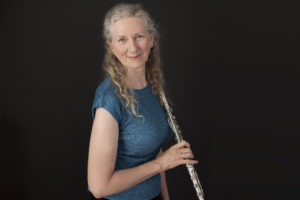 The final two pieces feature artists well known to Flute Journal readers. Alexa Still is a member of our editorial board. She is heard here playing selections from Les Chants de Nectaires by Charles Koechlin, recently featured by Nicola Woodward, and the Henri Tomasi Sonatine.

Finally, we hear Bonita Boyd, whose recording Aquarelles we recently reviewed and whom we will be interviewing shortly, performing the Sonata, Op. 24 by John La Montaine.