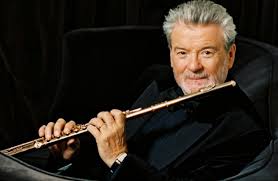 Sir James Galway is celebrating his 80th birthday. Still going strong after a career spanning decades, Sir James, who was knighted in 2001 and continues to be known as the “Master of the Flute”  continues to concertise around the world, although, more focused on the next generation of flute. players, he is concentrating more and more on his role as an educator.

At 70, Sir James was honoured with a Lifetime Achievement Award by the National Flute Association.   Your editor took part in the celebration at the 2009 NFA convention in New York City where a special performance by 1,900+ members was organised to honor Sir James.

At the time of his 75th birthday, he was honoured by the BBC.

Everyone at International Flute Journal sends Sir James their heartiest congratulations and best wishes for many more years.

The BBC Documentary — Being James Galway (2015) A portrait of the renowned flautist, charting his humble beginnings with a Belfast flute band and rise in the classical music world: