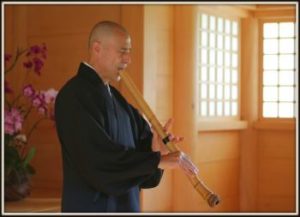 Many of our Flute Journal readers will be familiar with Riley Lee; his articles about the shakuhachi have been read by close to 27,000 of you. Now, however, we have an opportunity to review some of Riley’s remarkable performances. His new recordings are a three volume set dedicated to the music of Hildegard von Bingen. All three volumes will be released as a boxed set later in the year. For now, however, they are to be released singly and volume one is just now becoming available. To say it is remarkable would be an understatement.

Perhaps it would be interesting to scroll down to the sampler below and play the first excerpt. I think it will be evident immediately just how extraordinary this music is. Not because it is weird, bizarre or outlandish in some way. No, it is remarkable in that these two music traditions, one Japanese the other European, from which it is drawn, should work together so smoothly, in such a seemingly effortless manner. 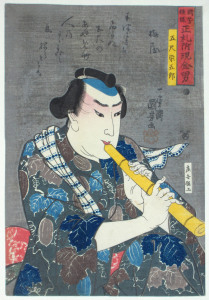 Those who have read Riley Lee‘s articles here at Flute Journal will know that the shakuhachi is an ancient form of end-blown bamboo flute that was imported into Japan from China sometime around the 8th century, and which has developed its own highly unique tradition and repertoire, and gained quite a following in the West in recent years. Also gaining in popularity has been the music of Hildegard von Bingen, a combination composer and saint from the 12th century, for whom a short biography can be found below, with much more coverage of her life and music currently available online and in print.

It is one of the great benefits of modern, high-speed, world-wide communications that such treasures can be enjoyed so widely, although it should be pointed out that laborious work by musicologists and ethnomusicologists over many decades went into originally unearthing them. Nevertheless, it takes the insight of artists such as Riley Lee to bring them to the concert stage and the recording studio and, even more brilliantly, to perceive and bring to life the kinds of mergers and connections of styles such as are realised here. 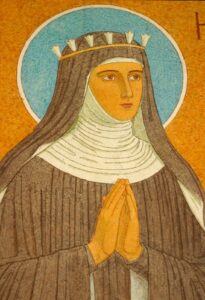 What can one say about this music? Separated by four centuries and 5,800 miles, and coming from two cultures that could not be more different, in the hands of an enormously talented, and even more experienced artist, (he calculates that he has played the shakuhachi for 70,000 hours over 50+ years) the universality of music, when perceived at the deepest levels, makes itself known. And, as in this case, it can emerge as something quite stunning.

Perhaps we should not be surprised. Saint Hildegard was a nun, deeply committed to the Catholic Church. The shakuhachi became associated with itinerant monks of the Buddhist tradition. Both traditions, however far apart, were committed to that deep inner silence from where both the deepest spiritual experiences and the deepest artistic expressions emerge. We are very fortunate that, in this case, the result has been expressed through music of the flute, and can help us reach similarly deep levels of experience.

We should congratulate Riley Lee on his unique accomplishment while we await volumes two and three with great anticipation.

Riley Lee on the Shakuhachi