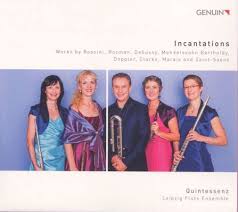 The Leipziger Querflötenensemble, Quintessenz is one of the oldest and most prestigious flute ensembles in the world. As they celebrate 20 years of togetherness as a flute ensemble, this recording shows off their chamber excellence in a truly magical fashion. From beginning to end, the pieces took me on a journey that carried me from spiritual roots in the Celtic dances to the rawness of rhythms of the heart and soul. Creatures of myth and legend were conjured through sounds that almost wound the senses with extreme colours. . . I forgot it was a flute ensemble. 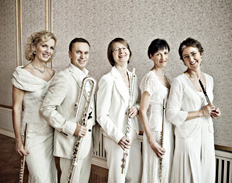 The members of Quintessenz on this recording are Anna Garzuly-Wahlgren, Gudrun Hinze, Ute Günther, Bettine Keyßer and Christian Sprenger. Each one is a highly accomplished musician, with stunning stories about their careers included in the hardcopy CD’s programme notes. Each has a very individual ‘voice’ as a player, but when they perform as Quintessenz the ensemble is as one voice, each blending and playing with the sounds and textures. Their reaction and musical language together shows off the individual parts only when it’s warranted by the different periods and styles of the composers. Otherwise, the ensemble interacts as one, communicating so empathically as to shift effortlessly between the various facets of the musical conversation.

From the first piece, Rossini’s La Danza – Tarantella Napolitana, we’re carried away to exotic places, and we start to prepare for the unexpected. The quintet surrounds the listener and the anticipation of the journeys begins to heighten. Rosman’s Medusa follows on with raw colours and ancient voices that reach out to the 21st century. Rhythms and sounds in the two-movement work stir the imagination and invoke blood ancestors who practised rites and rituals. I can almost see the serpents hissing from Medusa’s head. The effects through headphones is magical! The balance between all the players is great, with just enough noise of the actual instruments to keep it ‘real’. 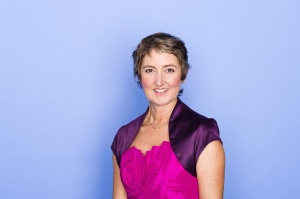 Claude Debussy’s picture of Puck — from Préludes 1 for piano —perfectly sets the scene for the following selection, Mendelssohn’s incidental music from A Midsummer Night’s Dream, which concocts all the splendour and fantasy of Puck, Titania and Bottom. It’s at once playful, mischievous and magical as they throw the phrases and rhythms back and forth. The King of Fairies’ realm is truly evoked in the Notturno while the Donkey’s bray harks back to more pagan rhythms in the Dance of the Clowns. With the last movement comes a close to the antics, calm restored with poetic resolution…just like the play. All consideration is given to the original form of the movements that Quintessenz have chosen, and the music looses no excitement or beauty in this recording.

For the Doppler, I loved the buzz-flute sound, the ethnic and deeper connections to the music of blood and relations. 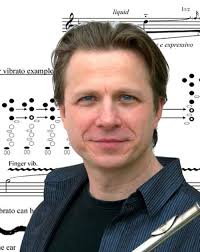 Ian Clarke’s Spells feels like a marvellous ride, with magical creatures on broomsticks. Ancient melodies evoke moods of spirits, with great effects and colours like bubbles from a cauldron. Then such stillness after the heretic dance in anticipation of magic at work.

The Marais feels both ancient and grand!! These variations are interpreted with such style and taste, balance and gracious elegance. And the dances are extremely evocative.

Danse Macabre has an excellent use of the Schnarrkopf Flute, with its buzzing headjoint which brings even more evilness to the performance. The timing is fabulous, the ensemble performance, as throughout, is truly excellent… And again, the arrangement is extremely good … as a listener I don’t even miss the orchestra!

There is so much integrity in these performances! Flawless execution, excellent recording, total attention to detail, style, history, energy, balance and interest for the listener. Highly recommended.

Notturno
Scherzo
Song of the Fairies
Dance of the Clowns
Finale 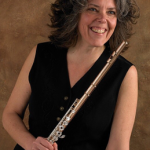 Flautist Lisa Nelsen has been playing in orchestras professionally since she was 21, including the Rotterdam Philharmonic the Tenerife Symphony Orchestra the National Youth Orchestras of Holland and Canada, and, since moving to England, the London Philharmonic, The Halle, the BBC Symphony Orchestras, the Continuum Ensemble and Music Theatre Wales. She now works with a multitude of chamber groups in the UK and abroad.