Find the next number in this sequence 3,6,18,72 . . . or 3, 7, 15, 31, 63 . . . I remember seeing these puzzles in adverts on the London Underground many years ago when I commuted to work in the West End. “If you can solve this,” the ad. Read, “you may have a future in data processing.”  Well I couldn’t, and I didn’t.  Today I am faced with an equally puzzling question: What in the world will Michala Petri come up with next? 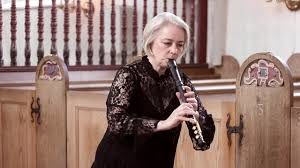 In a discography that extends back over 40 years and includes over 70 albums, recorder maestro Petri has achieved an astonishing level, not only of diversity of genre but also of across-the-board quality in everything she does. A quick review of her discography reveals that, from the very earliest days, she was covering the repertoire expected of a recorder virtuoso — Telemann, Handel, Bach, Vivaldi, Jacob van Eyck, etc. . . . she has done justice to the traditional Baroque literature. But then, in the midst of all this we suddenly encounter Luciano Berio, as Petri has commissioned and recorded work by the most contemporary of composers, particularly less well-known ones from Scandinavian countries. And so on. Just since we have been reviewing her work here at Flute Journal she has gone from a collection of Brazilian music with guitarist Daniel Murray and percussionist Marilyn Mazur — oh yes, she not only has brilliant material she also manages to attract world class colleagues and accompanists — and then produced a wonderful recording of the 6 Bach Flute Sonatas which was reviewed by Elizabeth Walker (and viewed by over 25,000 of you!)

After Brazilian Landscapes came an album celebrating Petri’s 25 year partnership with guitarist/composer/producer Lars Hannibal followed by the film music of Danish composer Axel Borup-Jorgensen. This was followed by four highly innovative recorder concertos by American composers with the Copenhagen Philharmonic Orchestra and then by the Bach concertos. So what is the next number in this sequence? 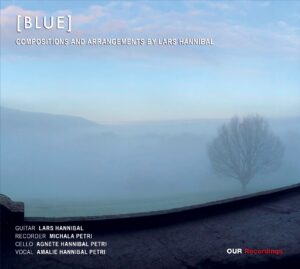 Well, there are clues. Michala has featured music by Scandinavian and Nordic composers on several occasions. Now another link in that chain has appeared with Territorial Songs by Faroese composer Sunleif Easmussan on which Michala is featured soloist. This has just appeared, however, and our review will appear in due course. Prior to that, however, she has appeared on a recording by a well known collaborator, one which has turned into quite a family affair, Blue by Lars Hannibal.

Hannibal’s collaboration with Michala Petri has extended from hundreds of concerts and dozens of recordings through 18 years of marriage (1992-2010) to ongoing collaborations with their own record company over several decades. While this recording is actually under Hannibal’s name it is still listed on Petri’s discography. In any case, it is a family affair as Lars and Michala are joined on three tracks by their two daughters, cellist Agnete and vocalist Amalie. The rest of the tracks, apart from one recorder solo, The Moor, are performed by the guitar/recorder duo. 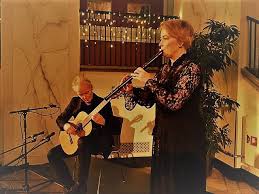 BLUE is fundamentally a two-part presentation, we are told in the notes, with the first ten settings originals by Hannibal and the other eight from the Danish social song tradition. The title was chosen to accentuate the music’s overall melancholy, its calm, free-floating quality, and introspective character.

One way to describe the music is to cite Hannibal’s influences. His biography states that he was first inspired by the music of Bob Dylan, The Beatles and the Rolling Stones. He became interested in the classical guitar after hearing to Andrés Segovia playing Bach. After a conservatory education he went on the embrace world music and then his association with Petri brought him many new dimensions of interest including Danish folk sone, music of China, jazz . . . it is almost endless. 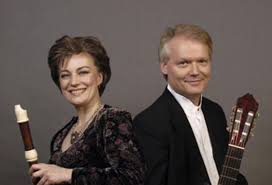 What we hear on BLUE is all of these influences brought in to the service of a genre that hints at all of them, while also adding another dimension through Amalie’s vocal stylings. Above all, the music has an engaging, pared-down simplicity and great clarity that is deceptively difficult to achieve. “The greater the emotional intensity, the greater the simplicity” Alan Hovhaness once told me, “This is not ‘intellectual’ music, but music of pure feeling.” That is as close as I can come to describing the genre that Lars and Michala arrive at. Profoundly conceived and beautifully executed this session can only add a unique chapter to the achievements of this remarkable family and a new dimension to the repertoire of the recorder.

Now watch for the next number in the sequence: Territorial Songs