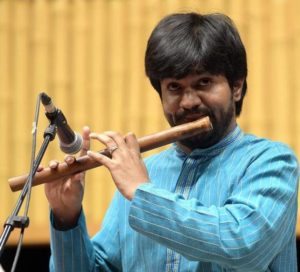 Represented by artists whose names are less well known than Hindusatani or North Indian performers such as flutist Hariprasad Chaurasia, sitarist Ravi Shankar and others, the Carnatic or South Indian tradition, while enormously popular in many Indian states, is represented by artists who need some introduction to American and European audiences. These include several very fine flutists.

Among these is a young artist whose name, Flute Jayanth, is becoming well known. By great good fortune, just as we were planning these articles, Jayanth has sent us the video clip below along with the commentary that follows.

Please enjoy “. . . this popular composition of Saint Thyagaraja in Raga Andholika set to Adi thalam. In this track, Jayanth is accompanied on the violin by Vid. L.Ramakrishnan and on the mridangam by Vid. Sai Giridhari.”

The lyrics for the kris, or composition are given in English translation, as follows:-

Drinking the ever tasteful essence of raaga, why don’t you rejoice, O mind! It gives the fruit of ritual, mediation (union), sacrifice, and enjoyment all together! As known to Tyagaraja, the jeevan muktas are those who enjoy the melody that is the glorious form of SadAshiva, that is the sound of tuneful Omkara. 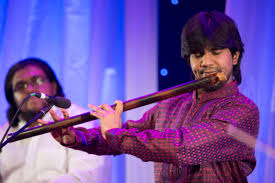 Flute Jayanth:- Jayanth is the most sought after carnatic flautist of his generation. A prodigy, affectionately called ​Flute Jayanth by thousands, is a young musician of national and international repute.

Born in a musical family, he was naturally drawn into early training on bamboo flute in the Indian classical music tradition of ​guru-shishya parampara (teacher to student transmission) since the age of five, from his grandfather and guru, late Kalaimamani Flute T. S. Sankaran, a Sangeet Natak Akademi awardee himself and a prime disciple of the legendary Flute Mali.

With his in-born talent, deep passion and primordial training, Flute Jayanth gave his maiden solo concert at the age of seven. His ability to play ​Ragam-Thanam-Pallavi (or, RTP) in three speeds (or, ​ThrikAlam) at that age, surprised many senior musicians, co-artistes and audience alike. Jayanth has a unique, virtuoso fingering and flute blowing technique to present his music beautifully even in the very difficult lower octaves on the ​bass and ​double-bass, thick-walled bamboo flutes, while maintaining shruthi suddham (perfect pitching) and excellent tonal quality. His expressive, ​bhava-laden rendering brings out the depth and soul of the lyrical aspects of compositions he presents (​gayaki -form). As a result, Flute Jayanth’s over 1600 solo concerts in India and all over the world, have consistently won him lasting appreciation from one and all, including senior musicians, co-artistes, connoisseurs and ​rasikas (or, music lovers). 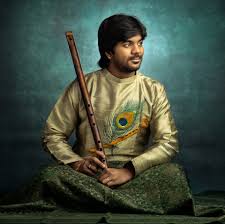 Jayanth is also an empanelled artiste with the ICCR. He has been invited to perform for Sangeeth Sammelan and National program of music by All India Radio . He was awarded ‘A’ grade by All India Radio at a very young age. He also has the privilege of performing for the Honourable President of India in Daman Diu. 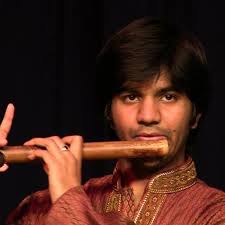 Watch for more on Carnatic flutists coming soon. Your editor.