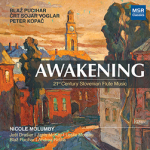 Over the last decade I have served on both NFA Jazz and World Music committees where we worked very hard to help flutists expand their horizons, both in terms of general musical awareness and of actual repertoire. Two recent recordings* bring encouraging signs that this tendency is spreading.

Nicole Molumby is an Associate Professor at Boise State University with a very busy performance, teaching and travel schedule. In fact, her new recording, Awakening, is the result of a professional trip to Croatia she took in 2009. Captivated by the music she encountered there she decided to build a recording project around it. Molumby describes her impression of Slovenia as “ . . . slowly awakening from its days as part of former Yugoslavia,” with a “. . . rich musical tradition and rigorous musical training . . . now being expressed in a fresh, uplifting and beautiful way, finding new audiences on the world’s concert stages.”

It is hard to know whether contemporary music from Slovenia constitutes world music; it certainly has not been mainstream repertoire, at least until now. In a Flutist Quarterly review of Paul Taub’s Edge: Flute Music from the Periphery of Europe I wrote: “. . . the encroachment of Western European Art Music into more far-flung parts of the world–including, of course, Eastern Europe–has had the effect of erasing many of the stylistic differences between European folk and art music traditions.” Add the effect of mass communications and both art and folk music become accessible to us, breaking down national and artistic boundaries at the same time. I would see this as a very positive development if the colors and nuances of Eastern Europe can add to the scope of the standard repertoire for Western flutists. Nicole Molumby clearly shares this view and with Awakening has made a major contribution to this effort.

Molumby focuses essentially on the work of two major Slovenian composers Blaž Pucihar and Črt Sojar Voglar, in fact the title for the disc was inspired by the English translation of Voglar’s piece, Prebujanje Narave (Awakening of Nature), which she commissioned specially for the project. And Pucihar, who contributes three compositions is also the pianist on two of them, and the arranger and pianist for the single piece by Peter Kopač which concludes the collection. 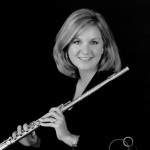 This is music that fits perfectly into the contemporary repertoire, while avoiding some its chromatic and serial excesses. It has, by turn, melodic appeal, rhythmic vitality and a touch of naïveté that is truly refreshing, with Pucihar’s work in particular displaying a strong jazz sensibility one does not necessarily expect to find in the northern Adriatic. Much of this music’s appeal comes from the robust interpretation it receives from Molumby and her colleagues whose playing combines technical precision and attention to detail with an underlying enthusiasm and brightness that carries all before it.

We can only hope to find Pucihar, Voglar and Kopač cropping up in flutists’ standard repertoire lists before too long. As Nicole Molumby puts it: “Although the music was written in Slovenia, it exists in a creative world without boarders or cultural expectations.” This is a world I would encourage flutists to explore thoroughly. Awakening provides an admirable gateway into this repertoire.

Review by Peter Westbrook, adapted from review previously published in Flutist Quarterly and used by permission.