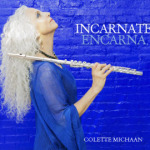 Colette Michaan is one of a growing number of artists who are combining jazz with a variety of world genres to produce music of great freshness and broad appeal. Many, like Michaan, are flutists, as the flute, with a part to play in virtually every cultural and historical setting, lends itself very readily to this kind of fusion. It still takes a skilful hand to pull it off but Michaan has done just that, producing a recording of both panache and sensitivity.

The key is to take the strong points of each genre and that is exactly what Michaan has done with this, her third recording. While her background combines her New York roots with her Egyptian heritage, the musicians she has assembled for this date are all primarily from Cuba. She does not attempt to reproduce a classic Charanga ensemble, as Fay Roberts has done with her Los Angeles ensemble, or Sue Miller with her UK based group. Rather, Michaan has taken the Cuban sensibilities and techniques possessed by these musicians and blended them with her unique voice on the flute to produce jazz with a tinge of both Latin rhythm and Eastern spices and perfumes.

This approach is evident from the opening selection, a Michaan original which gives the album its name. A distinctly Eastern feeling combines with the Latin rhythm to present a unique combination in a piece that, when I first heard it, I was immediately inspired to incorporate into my own repertoire. Identidad has a more distinctly Cuban flavor, and is remarkable for the subtle use of what could have been an unwieldy percussion section, with a jazz drummer and no fewer than three Latin percussionists. Equally striking is the front line of flute, trombone and violin — with the addition of Grégoire Maret’s harmonica on Incarnate/Encarna. This is certainly unusual in jazz and not exactly typical of charanga. Characteristic of both, however, is a flute floating over the ensemble and this is where Michaan excels, contributing precise leads and solo work that shows off her sense of adventure with an appealing clarity of execution. Ruet Reeve’s trombone adds an earthy element, especially on the lively Identidad. Pablo Vergara is notable not just for his fine piano work but also for the arrangements that give the whole project its special ambience.

The subsequent tracks unfold to reveal some very interesting and varied choices of material. Intention is a vocal feature for Roman Diaz that leads in to another vocal piece drawn from Yoruban folklore. Subsequent pieces are by both Latin and jazz artists, each one subtly shifting the balance of timbres and rhythmic feels. The common denominator throughout is Machaan’s incandescent flute. 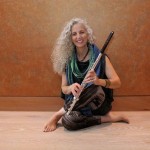 Down Beat Magazine has a poll that includes the category Talent Deserving Wider Recognition. If anyone deserves wider recognition it is Colette Machaan. Many artists have found that it is their third recording that provides the breakthrough. Incarnate/Encarna has the potential to do just that for her.

Review by Peter Westbrook. It originally appeared in Flutist Quarterly and is used by permission