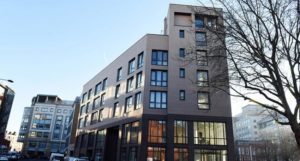 It’s a warm June evening and I’m hanging out in the bar area of the Irish Cultural Centre in Hammersmith, West London – looking forward to tonight’s gig – Celtic Caribbean Crossings featuring the flutists Keith Waithe and Jacquelyn Hynes.  It is the first time I’ve been here since the Centre was redeveloped in summer 2017, and it has completely transformed from an unassuming brick building minimally identified with the words “Irish Cultural Centre”, to a state-of-the-art modern venue.  The floor-to-ceiling windows wrap round the bar, and the well-kitted out stage make it a London venue to be reckoned with.  But, pleasingly, the upgrade has not affected the easy-going atmosphere which I remember from the old Centre.  I’m greeted warmly by the front of house as I come in: everyone is welcome in this place.

In the corner of the bar there are several glass cabinets displaying ceramics and small sculptures by local London Irish artists.  It is the fused glass which catches the eye – these smooth, beautiful things are compelling.  Thin layers of red, orange and gold carefully overlaid; an elegant liquid form in turquoise, green and silver – transformed and fired in the volcanic temperatures of the kiln into shapes which are unique and precious, more than the sum of their ingredients. 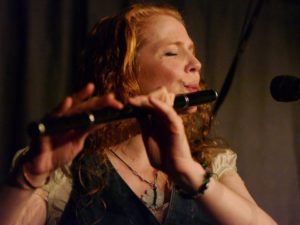 It is a perfect image. Tonight’s gig, which fuses Caribbean, South American, Arabic and Irish influences, exemplifies all that is special about the London music scene right now.  London has always welcomed all-comers – a rich mix of souls who, one way or another, find themselves drawn to this creative city from all over the world.  There is always room for one more potato in the pot.  But now, helped by the connections musicians make with each other online, the ease of publicising gigs to a music-hungry audience and the impact of simplified licensing laws, London is alive and kicking with new music.  On any given night you can find some of the best musicians from Armenia to Zambia.  But it is the combinations which are the most fascinating – as the musicians connect, bringing their distinct styles and traditions together.   Cuban meets Congolese; Jewish meets Turkish meets Bulgarian – layer upon layer of beautiful colours fired in the heart of the city to create something truly wonderful.  Caribbean Crossings epitomises all the dynamism and energy of this London experiment: everyone is welcome in this place. 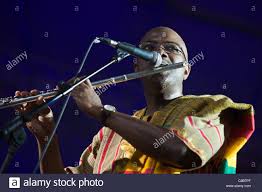 Jacquelyn Hynes is well known on the Irish and folk scene, and for her fusion project Avalonia – an Anglo-Arabic-Irish crossover project.  Her debut CD Silver and Wood was released in 2014 to critical acclaim.  Keith Waithe, who originally came to the UK to study flute from his native Guyana, is similarly well known as a passionate supporter of cross-cultural work, with his jazz-world music group The Macusi Players featuring Caribbean, South American, African and Indian influences.  He has several albums under his belt.

At the gig tonight we have that extraordinary blend of all that is best of the local and global.  The house is full. In the row in front of me, Irish regulars are sharing stories with a group of women from Trinidad.  The front of house gives us a long explanation about the fire exits, and there is much good-humoured ribbing and chatting between him and the audience as if we are in a small pub in Galway rather than in the heart of the Big Smoke.  But when the music starts, where else could we be but London? 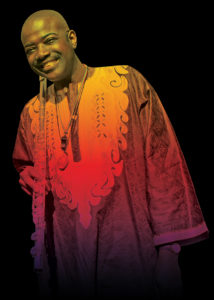 The first set opens with Waithe relaxed and charismatic in a gold and purple shirt, ably supported by his Macusi Players – his silver flute flanked by guitar, keyboard, two percussionists – with a skilful blend of both North and West African percussion.  The groove of the first tune is insistent, intoxicating – moving through Waithe’s assured solo into a light township-vibe descending into an extended conversation between the brilliant Zinga Rabhi on congas and Waithe’s flute – the first of many outstanding interactions between flute and percussion during the evening.  “This tune is for Guyana with love” Waithe announces – paying homage to his origins on an Ocarina he wears around his neck.  He moves on to his flute, capturing the sounds of the Guyanese tropical rainforest with some beautifully free and expressive improvising and bird-like flutter-tonguing.  Waithe takes us confidently through a range of styles including funk, soul, Calypso, using a variety of flutes (he has over 200 of them at home) and his percussive, gymnastic vocalising reminding of Bobby McFerrin.  He is assured and engaging, while the rhythm section is light on its feet, responsive to his solos. 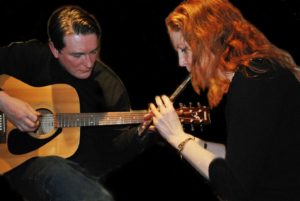 Hynes then takes the stage – every bit the Celtic goddess in green, with her curls of flaming red hair straight out of Irish mythology, accompanied by the Limerick-born guitarist J Eion.  The duo starts with an evocative lament, before moving through to a lively series of reels and jigs on both silver and ebony flutes, and a version of the ancient Arabic ballad Lamma Bada Natathanna.  Hynes’ flute playing is dexterous and accomplished, and Eion’s expressive guitar is Irish story-telling at its best.  Throughout runs the easy, amusing dialogue between musicians and audience.

As we move into the second set, the atmosphere is convivial, and the energy steps up a notch.  Some jokes about Hynes costume change into a green dress.  Some jokes about an incident when Waithe hurt his leg falling off a stage (“it’s just a stage you’re going through”).  All the musicians together, it is now we experience the full Irish/Afro-Caribbean fusion.  Waithe opens up with a soulful jazzed-up rendition of Danny Boy – to the delight of the audience.  Then we move into a reggae groove moving seamlessly into fast-paced reels, and back again to the South American rainforest.

As we listen, I reflect on why this extraordinary marrying of such different genres works so well.  There is an intense energy, drive and, above all, superbly skilled musicianship, which blends these very different styles so effortlessly.  In the audience, we are energised and captivated.

After the gig, I catch up briefly with the flutists.  It is great to learn that this is only the debut, and we can expect more to come from Celtic Caribbean Crossings.  We will follow this project with interest as it develops.

Maddy Shaw is a flutist working in London with a particular interest in jazz flute and improvisation.  Maddy worked as a barrister for many years before changing career to concentrate on developing as a musician.  She recently graduated from Guildhall School of Music, and is the founder, director and band leader of the Girl Plays Jazz Project introducing girls and young women to jazz improvisation.