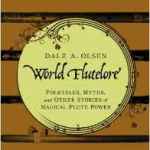 Until recently, Western folklorists, anthropologists and musicologists have given no, or very little, special attention to the flute. In fact, this instrument has been discredited and cursed since the stories of the unfortunate duels between Apollo and the flutists Marsyas and Pan, or of King Midas being assigned donkey ears for having preferred the flutes of Marsyas. Such a contrast between flutes and strings runs throughout the history of music and of culture. Even today, in France, we have such phrases as «c’est du pipeau» (it’s not serious), or where “he played his flute” means “he told her things wrong”. These and other examples show the lack of consideration generally granted to this instrument.

Now, however, a dense and exciting book, World Flutelore by the great American ethnomusicologist Dale A. Olsen, has finally emerged that explores world flutes and their magical powers from a global, rather than purely ethnocentric perspective. This book, subtitled Folktales, Myths, and Other Stories of Magical Flute Power, as Professor Olsen writes, “is about the cultural significance of flutes, flute playing, and flute players from around the world, as I interpret it from folktales, myths, poems, song texts, ethnographies, and other stories -What I call ‘flutelore’”

From a series of stories and myths about the flute, and from the five continents of our earth, Olsen analyses and comments from the perspective of science, knowledge and the experience of a long life as both an ethnomusicologist but also as a musician, a flutist, not hesitating to add his personal experiences. So Olsen builds a real ‘flutelore’ as he likes to define his work.

It is a journey from the most ancient times, in search of everything about the world of flutes and flautists; more than any other instrument and even more than singing and the human voice, the flute has a special relationship with Magic, mitigated by the breath required to produce the sound of the flute, as ” breath is the source of life itself … Breath is the fuel of life”.

From here the book unfolds with a series of 14 stories, besides the introduction and conclusion, linked with carefully explicated musical, mythological and anthropological principles, mingled with tales, myths and poems that introduce each of the following chapters: 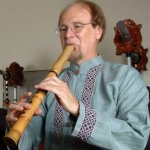 World Flutelore is a well documented and referenced book that will delight ethnomusicologists and folklorists. Above all, however, this is a book that will enthral all lovers of flutes of the world because the teacher is Dale Olsen who is not only a brilliant and very serious ethnomusicologist but also — and this is particularly felt in this book — a musician, a flautist who is passionate about his instrument who has seriously studied the flute and flute playing throughout the world. Highly recommended. 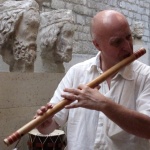 Pierre Hamon plays a variety of flutes in a variety of genres, ancient and modern, Western and Eastern. He resides in France