A Flute in My Refrigerator
November 11, 2014 (No Comments) by Peter Westbrook

A Flute in My Refrigerator: Celebrating a Life in Music by Helen Spielman. Spirit Song Press. Chapel Hill, North Carolina. 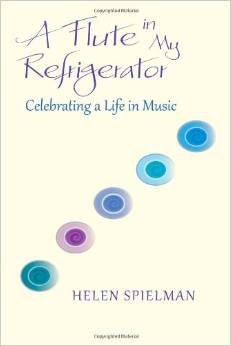 This very charming and insightful memoir of Helen Spielman‘s many years of playing and teaching the flute celebrates the stories of the lives of her students more than her own. Throughout these forty-four short vignettes, essays, and stories about her pupils and in her close interactions and eventual friendship with them, she provides a rare view of the daily life of a professional flute teacher. The tales she relates are intimate and full of personal honesty, sometimes hilarious, sometimes poignant, and often uplifting. She tells a wide variety of stories of the troubles her students overcome, of her relationship with her own teachers and well-known flutists, about the various pathways for finding your place in the world of music, of her experience in getting to know the world-wide flute community through the internet, and of her own struggles as a performer.

Spielman is obviously a devoted and effective instructor, but, as this very well-written book reveals, Spielman is more than that: she brings to her studio and approach to the flute a broad background as a serious flute student in New York city, experience from an early career as a special education teacher working with the visually impaired, work as a certified counselor, success in developing a large flute studio, and now as a renowned consultant on overcoming performance anxiety. (For more about Helen and her work as a performance coach and her positive approach to performing freely see: http://www.performconfidently.com/ ) 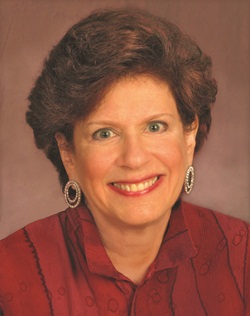 Spielman conveys well her passion, her willingness to probe deeply and talk intimately about the fabric of flute playing and life. Clearly she teaches not just the flute, but really teaches individual students who are people with varying personalities needs, interests, backgrounds, and goals. She is interested in the whole person, not just the time they spend with the flute in their hands. Because of this holistic approach Spielman has been very successful in developing outstanding young players, but she works with her pupils in a way that integrates music study and performing with their lives as individuals. She also is able to capture this spirit in her workshops and relationships with flutists she has encountered in her travels.

Although she considers herself an amateur flutist, she has a wealth of experience as a solo performer and ensemble player. Helen Spielman is now a well-known figure in the flute world through her many magazine articles (Flute Talk, The Flutists Quarterly, Flutewise, Flute Focus, etc.), her presentations and workshops at the conventions of the National Flute Association in the U.S., at meetings of the British Flute Society, and for flute clubs around the world.

This book should be of interest to any flute student, teacher or player who wants a fuller picture of how flute playing and teaching can affect both the teacher and student–who both are learners in the process. What comes forth is the humanity of Spielman, her warmth, and her commitment in her quest to impart not just the technique of the flute, but also how to make Music come alive, become part of your character, and even make you a better person.

Why was the flute in the Refrigerator? Well, you will just have to read this book to find out–and you will be entranced, bemused, and even moved by these stories with their uplifting view of a flute teacher’s impact on her students and how they have influenced her approach to the flute and life in general.