Works for Piccolo — Jean-Louis Beaumadier
August 3, 2020 (No Comments) by Ganved14
[Editor’s note: It has been several years since we heard from Nancy Nourse with her review of Jean-Louis Beaumadier’s Mitteleuropa. We are happy to welcome Nancy back as a contributor to Flute Journal with the following reviews of more recent offerings by Beaumadier as well as her comments on the recent CD by Natalie Schwaabe. A review of Beaumadier‘s most recent CD will appear shortly. The following appeared originally in theWholeNote and are used by permission.] 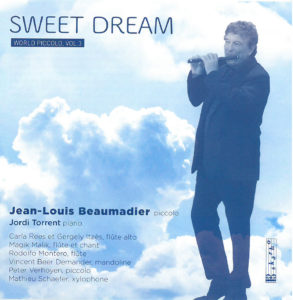 How much repertoire is out there for the piccolo player? Through extensive discoveries, adaptations and commissioning, Jean-Louis Beaumadier continues to amaze us with the breadth of musical possibilities that his oft-maligned little flute possesses. Sweet Dream, the most recent addition to his fine collection of nearly 20 recordings devoted entirely to the piccolo, offers fresh new works rendered with the captivating artistry we have come to expect from this musician whom Jean-Pierre Rampal once dubbed “the Paganini of the Piccolo.” 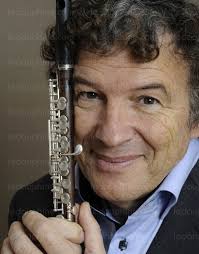 The controlled beauty of Beaumadier’s pianissimo is featured in Flint Juventino Beppe’s A Piccolo Poem. William Bardwell’s gamelan-inspired gem, Little Serenade, uses the percussive textures of the mandolin and xylophone to contrast and support some very lyrical piccolo playing. Rounding out the disc are Gordon Jacob’s Introduction and Fugue for piccolo, flute and alto flute, Magalif’s infectiously cheerful piccolo duet Tarantella and the improvisatory-like duet, Naomi for piccolo and flute with voice, by Magic Malik (Malik Mezzadri).

This CD is highly recommended for both the piccolo aficionados and its skeptics! 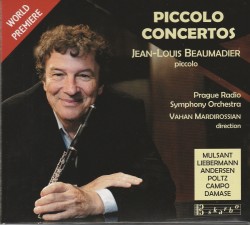 How extraordinary is this recording of the Prague Radio Symphony and virtuoso piccolo crusader, Jean-Louis Beaumadier! Smashing any expectations of the loud, piercing or vulgar, this first-ever CD comprised entirely of piccolo concerti with full orchestra, casts the solo instrument in a most reflective, sweet and expressive light. From the outset, the neo-Romantic/ impressionist music of Florentine Mulsant offers both soloist and orchestra multiple opportunities to soar, which they do marvellously. With whole-tone passages, Ravel-like transparencies and their sensitive rendering, it is compelling listening.

The well-known staple amongst serious piccolo players, Lowell Liebermann’s Concerto follows and then a colourful, newly orchestrated version of Joachim Andersen’s Moto Perpetuo. On both, Beaumadier assures us of his utter command of the instrument through impressive technical displays and his trademark control of hushed pianissimos.

While the redundancy of both of these works being available online (in other versions) might diminish the CD’s value, the sheer magic of this album lies in the remaining three concerti and the Mulsant, all dedicated to Beaumadier and composed since 2012. Véronique Poltz‘s “Kilumac” Concertino is brooding and suspenseful and showcases Beaumadier‘s stellar flutter-tonguing. Various minimalist ostinati spin ethereal tapestries in Régis Campo’s Touch the Sky, over which the soloist weaves evocative threads. In conclusion, the final Concerto composed by the late Jean-Michel Damase is a poetic, three-movement masterpiece, filled with humour, episodic melodic sonority and brilliant orchestration. Simply forget that it’s for a piccolo; this recording is truly a musical delight.