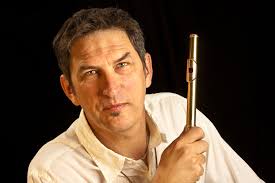 The Dutch-born flutist-composer Wil Offermans is well known as a flute soloist who has been concertising around the world since graduating from the Brabants Conservatory, Holland 1982, and as an acclaimed expert on promoting extended flute techniques to a wider audience through his compositions, concerts, workshops, courses and website.

Now he has added a new concept to his inventory of educational ideas in the form of Thumpy, a simple device that he feels can be more effective than a headjoint in helping young people to get started on the flute. As he describes it: “The ‘Thumpy’ flute is constructed out of a straight, cylindrical wooden pipe with an embouchure-hole near the middle. The pitch can be controlled by covering the open endings with the thumbs (basic combinations: open-open; open-closed; closed-open and closed-closed) and combining the various harmonics. The primitive character of this flute can be compared to the European bone flutes or the Japanese Ishibue (stone flute). 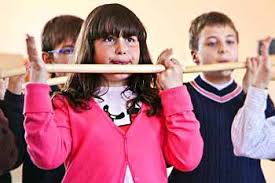 ‘The Thumpy flute can be used to blow naturally and to enjoy flute playing without stress. When we start playing the (Boehm)-flute, we will first focus on where to place the fingers. Second, we will think where and how to blow. This means that we do give our main attention to the complexity of the fingerings and how to hold the flute – possibly generating some kind of general body stress – while the blowing itself gets relatively little attention.

“On the Thumpy flute, however, the blowing process is the first and most essential aspect to deal with. Without any distraction by the fingering one can focus on the shaping the embouchure. If a child first learns to play the Thumpy flute, the playing becomes a natural action with a flexible embouchure. This will be a most healthy basis for any future flute-playing, including of course, a switch to the (Boehm)-flute. Thumpy is more than “using-the-flute’s-head-joint” to learn the blowing. Thumpy is not part of another instrument: it is an instrument on itself, made out of wood, with its own charm, its own scale and its own enjoyable repertoire.” 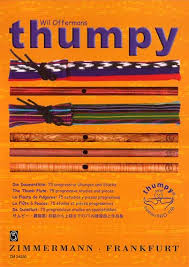 The instrument comes with its own instruction book written in six languages. Students learn how to produce the basic notes, play 75 simple songs and become proficient in tone production before picking up a Boehm flute. “The Thump flute,” Offermans writes, “can be a good way to find out a child’s natural ability and talent for the flute” before investing in a more costly instrument.The Thumpy can enable children to imitate bird songs and has lots of possibilities for improvisations, games in groups and music/flute introduction programs at schools. It has no sharp edges and is not as precious and delicate as a head-joint. It is strong and easy to carry around. 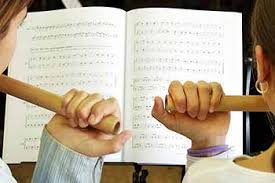 This reviewer has been having a good time with the Thumpy Mr. Offermans has sent us. The real test will be to what see some youngsters who have never played a flute can do with it. We have contacted some local elementary school music teachers, but it will have to wait until next term starts in September. Meanwhile it seems like a lovely idea and we will track its progress with interest.

Details about Wil Offermans and Thumpy  (Scroll down for video)