Walter “Foots” Thomas was born on February 10, 1907 in Muskogee, Oklahoma, the brother of saxophonist and flutist Joe Thomas. Like many other musicians, he began his career in a high school band, in his case the Kansas Vocational Institute, initially on cymbals, then bugle horn, before settling on flute. Walter’s music teacher, William Dawson, stressed the importance of mastering theory as well as performance, and by the time Thomas graduated from high school he could read difficult arrangements easily and was therefore in demand with local dance orchestras. After leaving school Thomas joined Fate Marable and his Society Syncopators on the Mississippi riverboats working out of St. Louis. 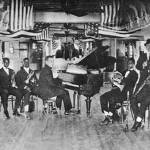 Fate Marable and his Society Syncopators

In those days, working on riverboats was a common job for young musicians, particularly jazz musicians, who had a certain level of expertise but wanted to rapidly improve their skills. Thomas may have been a part of the band when Marable made his only recording for Okeh Records in New Orleans. This would have been Thomas’s first recording session, but I have not been able to confirm that. Certainly the name of the tenor/baritone saxophone player, Walter Thompson, is similar enough that it might be a mistake in the transcription of Thomas’s surname.

After leaving Marable in 1927 Thomas joined his younger brother Joe in Jelly Roll Morton’s band in Chicago, as both a musician and the band’s bus driver. Thomas does not appear to have played flute with Morton, although live performances are a relatively unknown quantity. However, Thomas participated in a number of recording sessions on saxophone while with the band, which would have increased his familiarity and experience with recording techniques, standing him in good stead for his later recordings, including those on flute. 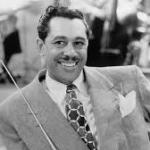 In 1929 Thomas left Morton to join the Missourians in New York City. The Missourians, which would become the Cab Calloway Orchestra when Calloway took over the band in 1930, were originally a Midwest group that became a high profile New York society band in the mid-1920s, playing at high-profile venues such as the Cotton Club. Here Thomas found his niche as low saxophonist–tenor, baritone, bass–flutist/arranger. When Calloway took over the orchestra, Thomas added musical director to his role.

Although Thomas recorded with the Missourians during the Missourians/Cab Calloway band crossover period in February 1930, (the Calloway band officially began recording in July 1930), these recordings do not feature any flute work by Thomas. His first recording session on flute with Calloway was 12 November 1930 on the Hubert Myers song Yaller where Thomas’s flute appears briefly in an ensemble line at 2.55. He also possibly plays behind the vocals, but it is impossible to hear definitively on the recording.

Perhaps the clearest recorded example of his ensemble flute work is on the Calloway Orchestra‘s March 1931 recording of Ellington’s Mood Indigo. The flute is prominent in the scoring, having the upper melody line; unfortunately there is no solo and the part remains through-scored within the ensemble. This piece is an exception in the Calloway repertoire, being one of the few instrumental works that they recorded and performed. As most of the Calloway book involved vocals, the arranging reflected that, and most of the arrangements that utilize flute feature it behind the vocals or within the reeds line. 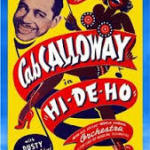 Thomas does not play flute on many of the Calloway Orchestra’s recordings, and it is unknown whether flute was utilized more in live performance. When it was used, frequently in Thomas’s own arrangements, it was used primarily to enhance the sound of the ensemble, usually as an upper melody or harmonic line, rather than to stand out from the ensemble. However, there are a few instances where the flute was used prominently in the melody line or in solos. The best example of Thomas’s solo flute work is the Vitaphone short Hi-De-Ho directed by Roy Mack in 1937. The film is a montage of Calloway repertoire held together with a loose plot. Thomas on flute is showcased in the Some of These Days scene at 9.25, which, even today, is an exciting and fun flute solo.

After 1940 Thomas did not record flute again and in 1943 he left the Calloway band. He went on to play with Don Redman and then, in 1944, he briefly led his own band. It is unknown whether he played flute in either of these combinations. In 1948 he retired from performing to teach music and work as a booking agent and manager, managing performers such as Dizzy Gillespie. Thomas passed away on August 20 1981 in Englewood, New Jersey after a battle with cancer.

Although his is a small legacy, it is made particularly significant by the integration of flute into a big band setting, especially in ensemble writing, an achievement matched only by the Chick Webb band with Wayman Carver on flute, until Frank Wess began to play flute in the Count Basie band in the early 1950s. 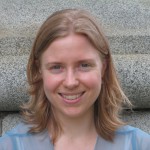 Flutist Aleisha Ward is Flute Journal assistant editor for Australia and New Zealand. She holds an MA in Jazz History and Research from Rutgers University, USA with her thesis focusing on the early history of jazz flute under the supervision of Dr Lewis Porter. She holds a BM in Jazz Performance and a PhD in Music from the University of Auckland where her thesis was on Jazz in New Zealand 1920-1955, and where she now works as music librarian.. She is a freelance writer and editor, occasionally lectures and tutors music history courses, and writes about Jazz in New Zealand at her blog nzjazz.wordpress.com