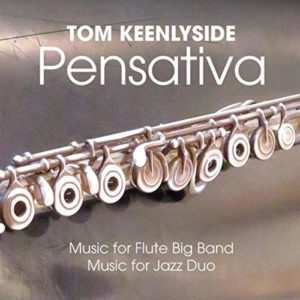 It is with great enthusiasm that we welcome a new recording from Tom Keenlyside.

This album immediately summons up two themes we have been emphasising at Flute Journal for some time.The first is the growing popularity of jazz flute ensembles, a genre to which Keenlyside has contributed a number of arrangements, including several we have performed with the Jazz Flute Big Band International in Liverpool, UK and at the London Jazz Festival. In addition, however, Keenlyside has now contributed a recording in which he performs these arrangements playing all the flute and keyboard parts. On other tracks he reiterates a flute/piano duo format that he exploited to great effect in another, earlier recording. Together, the results add an unexpected dimension to the world of jazz flute. 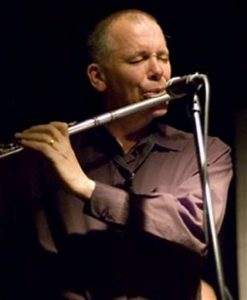 But who is Tom Keenlyside? This raises the second issue we have been harping on in recent reviews. As we wrote recently in reviewing Mary Fettig’s new album: ” . . . while all the plaudits go to the DownBeat Magazine Poll winners. . . there are many top artists falling between the cracks. We already mentioned when reviewing Lori Bell, for example, that these polls ‘. . . seemed skewed towards New York and Chicago based artists.’” Outside of these locations, there are many artists with high-level professional capabilities, spread across various genres. Mary Fettig is from San Francisco, Lori Bell from San Diego, Günter Wehinger from Switzerland, Mark Alban Lotz from The Netherlands. . .

Here is another case in point. Flutist, saxophonist, composer Tom Keenlyside has enjoyed a remarkable career in which he has worked across genre boundaries with artists as varied as Aerosmith, Motley Crew, Shania Twain, The Temptations, Mel Tormé, Tom Jones, Dizzy Gillespie and Lew Tabakin while double-billing with the likes of Oscar Peterson, Michael Brecker, John Scofield and Freddie Hubbard. Far from being based in New York, however, Keenlyside is Canadian, originally from Vancouver. Suffice to say he flies totally under the DownBeat Radar. And yet his work is of the highest quality, and remarkably free of contemporary clichés.

Here he is with his quartet Altered Laws at the 2011 Vancouver Jazz Festival playing Isabella:

For his most recent offering, Keenlyside begins with one of his most effective arrangements, Pensativa by Clare Fischer. He adds Chick Corea’s Times Lie and three of his own compositions, the hard-swinging Flat Foot Freddie, funky Miss Brandi and the waltz-time For Bob Murphy. Kenlyside’s writing is meticulously scored, very complete, with multiple variations on the main themes and backup figures for all solos. These are gems that, rather than conform to, help to define the Jazz Flute Big Band genre. And as for the performances, laying down 12 parts, covering the whole flute family and taking all the solos — including on piano and organ — takes some doing. Who is this guy? 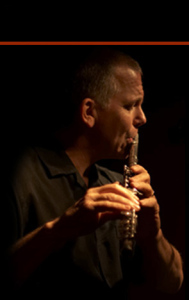 Between the big band charts Keenlyside joins forces with pianist Chris Gestrin to present  five duo performances that show his mastery of a completely different form. Duo playing can sound easy — it isn’t.  These players make it seem easy, however. I have enjoyed Keenlyside’s earlier recording with Miles Black for many years and continue to nag him to put some of the compositions into sheet music form. More on that later. For now, suffice to say that his teamwork with Gestrin is every bit as satisfying as his rapport with Black as they work through one Gestrin original plus standards by Ted Quinlon, Henry Mancini, Joe Zawinul and George Gershwin. Keenlyside’s playing may not please those who prefer their jazz players a bit ‘dirty’ but one can only admire his lovely sound and the way he applies his technical command to a style that is as direct as it is effortless, as emphatic as it is lyrical. It is a thing of beauty and that does not go out of date.

It is a remarkable accomplishment for an artist to manage a career that has so successfully spanned multiple genres in jazz, rock and popular music while emerging with such a pure concept when it comes to personal expression. Keenlyside has this and the chops to realize it. It may be too late for him to make it into the DownBeat poll but it is high time he became an overnight success.

We hope that this recording will soon be available directly through the Flute Journal site. Watch this space.