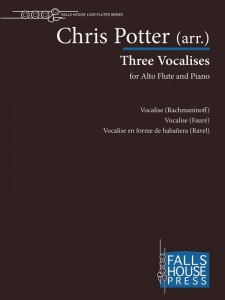 Following on from the publication of her Alto and Bass Flute Method Books, low flute specialist Chris Potter has now added to her list of transcriptions for these instruments. Until now, these have included works by J.S. Bach, Telemann and Brahms. She has also had transcriptions of pieces titled Vocalise by Fauré and Ravel. Now she has brought these together with the better known Vocalise, that by Rachmaninoff, to produce Three Vocalises, one for alto flute and piano, the other for bass flute with piano. Published by Falls House Press, these are lovely, and very welcome, additions to the low flute repertoire.

These pieces have more in common than their titles. Composed around the same time — the Fauré in 1906, the Ravel (full title Vocalise en form de habanera) in 1907 and the Rachmaninoff in 1915, when it appeared as the last of his 14 Songs or 14 Romances, Op. 34 — they also, not surprisingly, share distinctly similar stylistic characteristics, primarily a lovely, fluid melodic line. The wordless format has ensured that these pieces have been adopted not only by vocalists but also by instrumentalists of every kind, particularly the Rachmaninoff which has seen performances by cellists, pianists, clarinetists and saxophonists as well as by fine singers such as Kiri Te Kanawa and Anna Moffo. All three pieces have also attracted flutists, including recordings of the Ravel by Rampal and Pahud, but, so far, low flutes have not had good transcriptions available. With the growing popularity of these instruments, the appearance of these publications is therefore most timely. 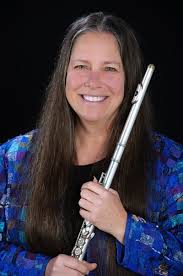 The many performances of these pieces reveals the range of interpretation they can support. Potter’s transcriptions reflect her typically thoughtful approach, not only in her choice of keys, for example — she explains that she has carefully chosen the most idiomatic keys for each transcription — but also in the very useful prefatory notes and performance suggestions she provides. Potter’s impulse to share her expertise finds her dedication to teaching showing through.

My first impulse was to play through the alto flute transcriptions (I do not own a bass). It was immediately evident that these pieces were within my ability — admittedly with some work — but, at the same time, well worth the time of a professional performer. The keys are comfortable, the tempi manageable, the instructions pithy (taken, I am sure, from the originals, the Rachmaninoff Lentamente, motto cantabile, the Fauré Adagio, motto tranquillo, the Ravel Presque lent et avec indolence), the melodic lines gorgeous (and refreshingly free of the later obsession to change the time signature every 4 measures!)

These are beautifully done transcriptions of quite lovely pieces, immaculately presented and modestly priced. I can’t think of any reason an alto or bass flutist would not have one or other, or both, of these publications in their collection.

This review first appeared in Flutist Quarterly, and is re-produced with their permission

Musicians in Support of the Environment Cléa Galhano — Latin Reverie