Arranged by Yuko Hoshi. Recorded May 2021 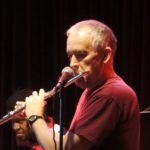 * Many thanks to Mike Chalmers for alerting us to this video, along with his other reporting for Flute Journal. Originally from Bath in west England, Mike’s career as an airline pilot allowed him to meet some great musicians and play salsa in Caracas, funk in Accra, bhangra in Bangladesh, soca in Tobago and highlife in Harare. He first came to the USA courtesy of a scholarship to the University of Pennsylvania in Philadelphia, where he played with the Penn Jazz Ensemble. Now retired from British Airways, he divides his time between the Philly/New Jersey area and London, where he plays baritone saxophone with the Cuban dance band Orquesta Estelar and bass flute with the Jazz Flute Big Band.