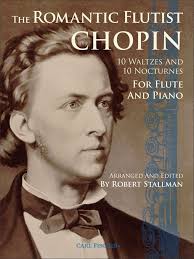 10 Waltzes and 10 Nocturnes For Flute and Piano

Arranged and Edited by Robert Stallman

Robert Stallman’s name is well known in the flute community, for his significant contributions as soloist and teacher, but also as scholar and arranger. According to his bio, “. . . he has long made it his mission to expand the flute repertoire with apt transcriptions, gratifying flutists everywhere. With over 70 publications from prominent houses in the USA and the Europe, he has emerged as the preeminent editor and arranger of flute music active today.” Cited are his collections of J.S. Bach, Mozart, Gabriel Fauré. Dvořák, Schubert and Berlioz. According to Traversières Magazine, “No other flutist has given proof of so much daring and originality in this area.” 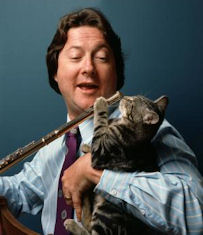 If the new set of transcriptions from Carl Fischer is anything to go by, Stallman’s work is indeed of the highest quality. Entitled The Romantic Flutist: Chopin, the collection is divided into 10 Waltzes and 10 Nocturnes, all transcribed from solo piano to flute and piano.

It might seem that adapting Chopin should be quite straightforward. Many –perhaps most — of his piano pieces have a clear melodic line that works well on the flute, leaving the harmonic structures and other accompaniment material to the pianist. Thus these pieces should almost arrange themselves. Perhaps this is true, but I am equally sure that there were many decisions for Stallman to make here, beginning with the choice of pieces, then the choice of key, if needed, as well as the fashioning of the flute line.

There are more than technicalities, however. There is an intangible quality involved in any any music. Stallman recognises this when he writes, “Chopin transports us into a realm of mystery, of peace, and celestial beauty.” In the preface to this edition, he gives a hint of how Chopin transports us to this realm, citing Franz Liszt, “‘One should sing more at the piano. . . If we were to hear one evening . . . the singing of a Chopin Nocturne, what an emotion!’ Thus Chopin’s rival pointed to the heart of Chopin’s aesthetic and personal style — to create a singing instrument, imitating closely the highly expressive art and virtuosity of bel canto opera.” 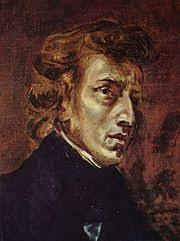 Stallman goes on to note Chopin’s love of, and devotion to, the great bel canto singers of the day, which developed after his move to Paris in 1831. He goes on to trace the specifics of bel canto that Chopin adapted to his writing for the piano, particularly in his Nocturnes. The conclusion is inevitable: however adept the writing may be, on the piano the bel canto effect has to be an illusion. However, “Because the flute is the closest instrument to the human voice, we can, with serious study, bring Chopin’s haunting Nocturnes and lilting Waltzes to life in the best bel canto tradition.” Thus, perhaps ironically, the flute/piano transcriptions come closest to fulfilling Chopin’s purpose.

This is the task that Stallman sets himself. Whether he is successful will rest with the many flutists who will purchase this beautifully produced publication and attempt to achieve the aesthetic Stallman professes on Chopin’s behalf. He is clear that much of this depends upon correct interpretation of the parts. “Paramount to the bel canto style was the use of a subtle rubato in the delivery of the melodic line.” It will be of great interest to performers to see if they can achieve this, and to teachers to see if they can communicate it. It will be in everyone’s benefit to play these beautiful pieces.

The transcriptions appear as follows. To assist in the interpretation of the pieces, links are provided to performances of the original piano compositions of Frédéric Chopin. These are, of course, in the original keys whereas the key has been changed in a number of the transcriptions.