The Dancing Flute – The Flute and Piano Music of Geoff Eales
October 8, 2014 (No Comments) by Peter Westbrook 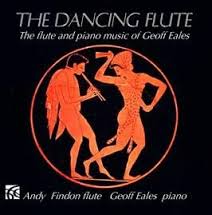 This is a CD that lives up to its name – fun and lively music, yet a challenging real mix of styles for all members of the flute family as well as penny whistle! This recording features the flute music of Geoff Eales, who is widely regarded as one of the UK’s most formidable jazz pianists and composers. He has a number of compositions to his name, including a symphony, piano concerto and numerous chamber works.

The playing is excellent as one would expect from Andy Findon, an outstanding and versatile classical flautist who is also a leading exponent of ethnic flutes. He is accompanied equally ably by the composer himself.

It is a definite plus to have some new music written for the other members of the flute family – the piccolo, alto flute and even bass flute.   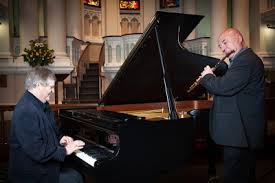 The repertoire is refreshingly different and new to the standard flute repertoire. It varies in style and mood, from jazzy with lots of busy syncopated rhythms, to more reflective and bluesy. The tunes are memorable and very accessible from an audience point of view, so incorporating this music into an otherwise classical programme would be a welcome addition. It is challenging music for both flautist and pianist, however, technically demanding and virtuosic, covering all three octaves of the flute, yet exciting to play with a real sense of duet between the two parts. It would suit advanced students upwards to the professional looking for new British contemporary music to add to their repertoire.

Definitely a CD to add to one’s library, and an inspiring collection of new flute music for those keen to investigate Geoff’s music further. The sheet music is published by Astute Music and available from www.astute-music.com.

A 12 minute excerpt from The Dancing Flute can be seen at: https://www.youtube.com/watch?v=b49KAnqJyCE

Rachel Smith has earned a Doctor of Musical Arts from the University of Manchester. She has given concerto and recital performances across the UK to Europe, Japan, Zimbabwe and the USA. She has made recordings and broadcasts for BBC Radio, TV and film, including BBC Radio 3. She also performs across the UK with the Hilser Trio, and is principal flute with the Coldstream Guards Band. A well respected and sought-after teacher, Rachel has given master classes and workshops across the UK and abroad, and is a specialist woodwind examiner for Trinity College exams.