Sam Most, “Father of Jazz Flute,” Honored in Movie
June 28, 2021 (No Comments) by Peter Westbrook

As the author of The Flute in Jazz it was my privilege to meet and interview many of the early pioneers of jazz flute performance. Since then, sadly, I have had to watch as, one by one, they pass away: Buddy Collette, Bud Shank, Herbie Mann, David ‘Fathead’ Newman, James Moody — we have lost all of them in the last few years. Last year they were joined by the man said to be the “father of jazz flute” as Sam Most succumbed to cancer in a Los Angeles hospital. In many ways, Sam did not receive the recognition he deserved. Fortunately, he is remembered in a full-length documentary movie. 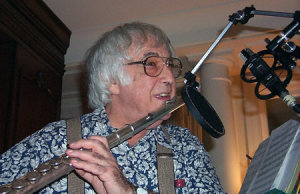 While Sam’s passing was noted in the national press – the Los Angeles Times and New York Times were among those that published obituaries – Sam was, along with others of his generation, largely ignored by critics in favor of younger artists and the various “new things” that sweep through jazz from time to time. Listening to the comments of his fellow musicians, however, and surveying a performance and recording career spanning five decades, reveals both the extent of Sam’s contribution to music and the affection in which he was held by all who knew him. It is hard to exaggerate Sam’s contribution to the development of the flute as a jazz instrument, particularly in its adaptation to the language of bebop–the music of Charlie Parker and Dizzy Gillespie–in the years following World War II. Jazz historian Leonard Feather writes: “Justice should demand that the history books document Sam’s role as the first truly creative jazz flutist,” while perhaps the most famous jazz flutist of his era, Herbie Mann, stated that, “The order of jazz flutists is Wayman Carver, Harry Klee and Sam Most. Then the rest of us followed.” Bassist and composer Charles Mingus, who was not given to excessive praise of his peers, named him as “. . . the world’s greatest jazz flute player.” At the same time, however, he was also referred to as a “vital but often overlooked virtuoso.”

Born in 1930 in Atlantic City, New Jersey, into a family of Lithuanian Jewish  immigrants, and growing up in the Bronx, Sam was inspired to a career in music by his elder brother Abe Most, an accomplished clarinetist and studio musician. After graduating from City College and the Manhattan School of Music, Sam joined his brother in the Tommy Dorsey Orchestra at age 18, playing clarinet and tenor saxophone. He went on to work with the big bands of Don Redman, 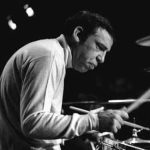 Buddy Rich and others, and made a number of fine recordings with his own small groups.  In the early 1960s Sam followed his brother to the West Coast to work in the recording studios, while continuing to make some influential jazz albums, for the Xanadu, Prestige, Debut, Vanguard and Bethlehem labels. Along the way he performed with an absolute Who’s Who of jazz and wrote a highly regarded method book, Jazz Flute Conceptions. But, self-effacing to a fault, he learned that self-promotion can often be more important than talent in the music business, and periods of activity were interspersed with times of hiatus.

Recent years have seen Sam produce more fine records, however, and to feature in a documentary film, Sam Most, Jazz Flutist by Edmond Goff and Fernando Gelbard. Gelbard sent me some thoughts about Sam. “In my opinion,” he writes, “Sam was the most important jazz flutist ever. . . There are and there were many jazz virtuoso flutists, like Hubert Laws, Jerome Richardson, Frank Wess, and all of them admired and praised Sam. He will be missed as a wonderful human being and a one of a kind musician.” 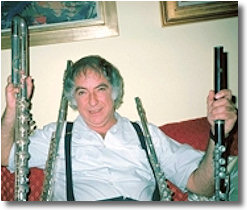 It is not clear when Sam took up the flute; he thought it was when he was about 18, in 1948, when his brother sent him an instrument. His first recording, in 1953, established him as the model bebop flutist and the only point of reference for up and coming jazz flutists. As Herbie Mann told me, “Sam Most had one song, Bennie Goodman’s Undercurrent Blues, where he played flute, and I listened to it as much as I could to see what it could do for me.” The following year, 1954, Sam was voted Downbeat Magazine‘s “New Star.”

By the 1960s, Sam found himself using the flute more frequently as jazz arrangers began to write for it as part of their experiments with new timbres. As the years passed, Sam was admired for his saxophone and clarinet work–not to mention his occasional scat singing–but he became best known by far for his flute playing. While his sound, sometimes more breath than tone, was off putting to schooled players, his improvisations were models of invention and coherence. As Fernando Gelbard puts it, “He never missed a single chord, and his solos were true jazz melodies.”

It was during this time that Sam developed a technique that was to become very influential. Trying to practice late at night in his New York apartment without disturbing the neighbors, he found he could do so by humming quietly into the instrument. On stage, this developed into a unique sound that was picked up by players such as Yusef Lateef, Harold McNair, Jeremy Steig and, most significantly, Rahsaan Roland Kirk. 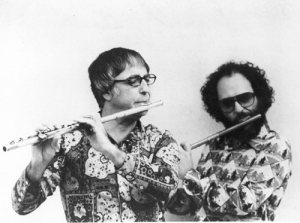 Sam Most (L) with Joe Farrell

Former NFA jazz chair Ali Ryerson had an opportunity to work with Sam over the last two years, inviting him to perform at the National Flute Association‘s Las Vegas convention. Noting that: “All the jazz flutists loved meeting and hearing this jazz flute legend,” she writes, “Sam was one of the kindest, most gracious men I’ve ever known. And no one played better jazz lines than Sam Most. Such a talent. I spoke with Sam the day before we lost him. He was in amazing spirits, and at peace. He told me he had a wonderful life and was so grateful for it. I feel so grateful to have known him.”

Peter Westbrook is Editor-in-Chief at Flute Journal, World Music Chair at the National Flute Association (USA) and the author of The Flute in Jazz: Window on World Music – www.fluteinjazz.com

Kyle Dzapo — Notes for Flutists: A Guide to the Repertoire An Interview with Herbie Mann