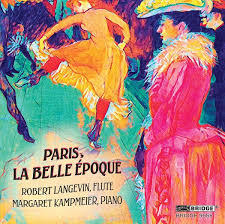 It was with great pleasure and anticipation that I recently received a new recording by Robert Langevin, under the title Paris, La Belle Epoque. Almost immediately, however, as I began my background research, my pleasure was supplanted by surprise to find Susan Goodfellow, in a Flutist Quarterly interview (2006) referring to Mr Langevin as “. . . the little-known but highly regarded flutist.” Highly regarded, yes — after studies with such teachers as Aurèle Nicolet, Maxence Larrieu and James Galway, he has held The Lila Acheson Wallace Chair as Principle Flute of the New York Philharmonic Orchestra since 2000, following stints as associate principal flute of the Montreal Symphony Orchestra for 13 years and Jackman Pfouts Principal Flute Chair of the Pittsburgh Symphony Orchestra, appearing on numerous recordings with these ensembles, not to mention numerous recitals and chamber music programs for the Canadian Broadcasting Corporation. In addition, Mr. Langevin is a member of the Philharmonic Quintet of New York with which he has performed concerts on several continents. He has given recitals and master classes throughout the United States, Canada, Spain, Costa Rica, Japan, North Korea, Singapore, and Vietnam. He is currently on the faculties of The Juilliard School, The Manhattan School of Music, and the Orford International Summer Festival. 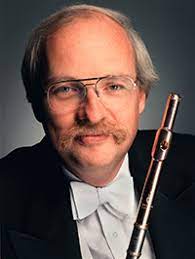 So . . . highly regarded, distinguished, prominent, and little known? How is that possible?

It did not take long to find the answer. Unlike many artists, Mr Langevin has no website of his own, very little promotional material online and, perhaps most surprising, only two or three recordings available under his own name. Of course, he can be heard on numerous recordings from the various orchestras he has graced now for many years. He has also had many opportunities to perform as guest soloist with various ensembles in both orchestral and chamber music settings, most notably in a 2015 collection of Nielson concerti and a 2019 rendering of the Mozart D major Concerto with the NY Philharmonic. But as far as his own recordings are concerned, compared with many flutists, he has very few. And so I realised that this new recording is something rare and precious.

For this set, Langevin has chosen music from what is indeed La Belle Epoque, The ‘Beautiful Era.’ This refers to French music between 1871 (the end of the Franco-Prussian war) and 1941 (the beginning of world War I.) There have been periods throughout history when political, cultural and economic factors have been in balance within a certain time period, allowing for artistic expression to emerge on a high level. Friedrich Nietzsche spoke of there being opposing Apollonian and Dionysian forces that occasionally, and briefly, come into balance with each other. Examples are in ancient Athens in the time of Aeschylus and Sophocles, modern Vienna during the life of Mozart. Just such a period existed in France, mainly in Paris, during these four decades, leading to some of the greatest music and visual arts — painting and sculpture — to emerge, along with some significant breakthroughs in the sciences.

Reading the excellent notes by James M. Keller included in this excellent recording, I also learned that this was also a significant period for the development of the flute. While it was the German flute-maker Theobald Böhm who had perfected the modern Western concert flute by mid-century, “. . . refinements of his design” we are told, “fell largely to ensuing French instrument makers. These up-to-date flutes became de rigueur in France when their use was mandated at the Paris Conservatoire” by a series of flute professors from Louis Dorus (1860-1868) and Henry Altès (1868-1893) to Paul Taffanel (1893-1908). “An emerging cadre of French musicians,” writes Keller, “mastering the newly enhanced technology, inspired an outpouring of flute repertoire from French composers of the Belle Epoque.” 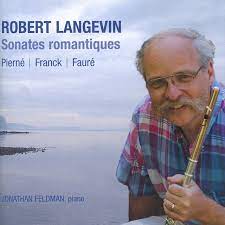 It is interesting that Mr. Keller, Program Annotator for the San Francisco Symphony, tells us this because, in fact, Mr. Langevin, in one of his other rare CD recordings, issued in 2010 by Avie Records, also focuses on French music from this same period, with compositions from César Franck, Gabriel Fauré and Gabriel Pierné. This recording, labelled Sonates romantiques, focuses exclusively on transcriptions for the flute from violin sonatas. This is a perfectly valid, in fact, important part of the flute repertoire and his performance of these works, accompanied by pianist Jonathan Feldman, is, quite simpl,y flawless. When we come to Paris, La Belle Epoque, however, where Mr Langevin is accompanied by pianist Margaret Kampmeier, we have a somewhat different but complimentary collection. Here, all of the pieces were written for the flute and, in many cases, performed by prominent flutists of the era.

There is little to be said about Mr. Langevin’s performance of these pieces; others more familiar with this repertoire may be able to find fault with it, but I certainly cannot, either in execution or interpretation. It can only be said, upon reflection, that, at this level of performance, it is a crying shame that he has not done more. (Perhaps we can persuade him that he could spend some more time in the studio during the orchestra’s off-season and still enjoy driving his sports car around his various vacation spots!) 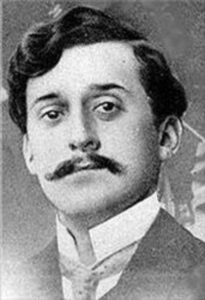 The composers featured here are largely well-known: Charles-Marie Widor, Jules Mouquet, Gabriel Fauré (again), Georges Enesco, Philippe Gaubert and Claude Debussy, and all the pieces fall within the Belle Epoque period, written between 1875 and 1913. (By accident or design, a later piece of Gaubert’s, his Aquarelles of 1915-1921, is included in another recent high-quality recording of the same name by flutist Bonita Boyd.) While these are certainly individuals as composers, on initial exposure these pieces appear to have a considerable uniformity of style, emerging from similar psychological impulses as with the impressionist painters, who are, on the whole, better known than the musicians of the era, (until we come to Debussy, whose work leads further into the twentieth century than his contemporaries, and Ravel, who is missing from this collection, having shown less interest in the flute.)

Ironically, this is a time of both balance and transition, a reaction against the extremes of Romanticism while holding back from the apocalyptic descent into madness represented by Richard Strauss’ Salome of 1903 — the descent — and Alban Berg’s Wozzek — the madness — which was actually written during the slaughter of the Great War. Perhaps we can call La Belle Epoque a precarious balance. Somehow the French were briefly able to manage these impulses, to cloth them in exotic mechanisms — colour in painting, dissonance in music — while holding onto just enough of the essence — form in painting, tonality in music — to still invoke Apollo while keeping Dionysius at bay for a few more short years, 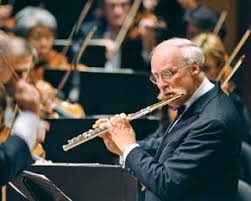 The result is wonderful music which is clearly attractive to Mr. Langevin. In our interview I asked him if growing up speaking French in Canada did not orient him towards French music. He seemed surprised by the idea but I am convinced. And the obvious conclusion? A third volume, if there is enough quality repertoire remaining from this period — perhaps Massenet, Saint-Saëns . . .

Be that as it may, these are wonderful performances that belong in the collection of any serious students or practitioners of flute performance. While Paris, La Belle Epoque is outstanding, these two recordings really should be treated as a pair and collected together as beautifully executed examples of this very important area of flute repertoire.

Here is the program for Paris, La Belle Époque: 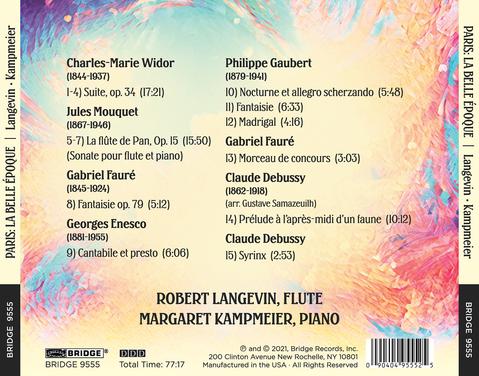 It can be purchased here

The Tracklist for Sonates romantiques is:

Here is one candidate for a third volume of pieces from La Belle Époque. Georges Barrère wrote Nocturne in 1913