Robert Dick at the San Francisco Conservatory of Music
April 24, 2017 (No Comments) by Ganved14 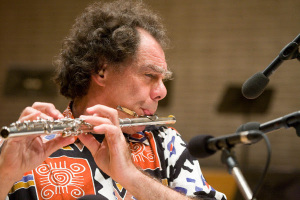 Robert Dick gave a masterclass last night at the SFCM, and it was everything I had expected and more. His class turned into a lecture-demonstration with about 20 people. He spoke for nearly 2 hours and played only a little bit, but it was fun to listen to him talk about music and life and how important it is to live in our era and not play as they did in the 1700s, etc.

The man is not just a flutist, of all styles, but an extraordinary musician with insights far beyond the books we learn from. Though the audience was small, his gift and insights were enormous. As a professional flutist myself, I was more surprised to hear from him exactly what I tell my students: you must learn to sing, for that is the true way to gain consistency of tone and to maximize your inner potential. Singing and playing and learning the harmonics of the instrument make for a beautiful sound.

Dick started the evening with an improvisation on the head joint he designed — the Glissando Headjoint® * — which slides, creating quite a new playground for the flute. He talked about how important it is to relate to music in the present era, as emerging new flutists. to concentrate on developing your inner voice and personality.

I tell my students: “You are only as good as your tone. Fast technique means nothing if your tone says nothing.” He paraphrased my philosophy which, in turn, provided me with a rich, lush and deep understanding of how important individuality is, how important it is to step away from the written page, to allow yourself to play one note until it leads to another. Experiment, listen, and design the direction your careers will take. Personality is a MUST to succeed. He shared what J.J. Quantz said about what makes a good musician. “They must be a good player, a good composer and a good improviser.” 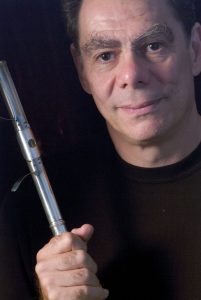 He taught the beginning mechanisms of throat singing, and could not emphasize enough that it takes time to succeed, but once you do, your singing voice and your flute voice will merge into the correct harmonic alignment. Throat singing can lead to playing chords on the flute, to a varied number of nuances in tone, and perhaps can give you the upper edge needed to get the job!

I recalled a statement by Spanish master chef José Andrés: “Modernity is a subtle change in a very traditional dish.” Talking about food in Spain is very similar to the way Robert Dick talked about a musician in today’s world, where you must reinvent yourself in order to rise to the top. Do you know the way to make that happen? No matter what the art form, whether it be a pastry chef with Picasso art as icing, or Chopin in your ears as you eat, who are you? What is your path, your personality, your goals?

This was very interesting for me as I teach the exact same principles, with the voice and lyrics and opening and knowing how your fingers vibrate with the note, etc. We are of the same era: we went way beyond the classical training in our thoughts and I was so happy to see a classical player so freed of it. He actually represented my shadow, and we really hooked up when I heard him last night.

I smiled, but I do wish he had played a little more!

More information about the Glissando Headjoint 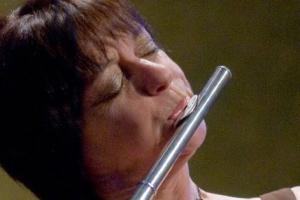 Flutist Nika Rejto received her BA degree from the University of Southern California, and studied flute with Louise DiTullio, James Walker, Bernie Atkinson and Tom Lee. She went on to study mime with Etienne Decroux in Paris, then returned to the US for further study: music at the Berklee College of Music, and the Dick Grove School of Music, modern dance with Saida Gerard in Los Angeles. Since that time she has been a stalwart of the San Francisco Bay Area arts scene, performing as a musician, actress and dancer. Equally at home with classical fugues and jazz standards, including her own compositions, as well as with Latin music, she has issued seven CDs under her own name and appeared as a guest artist with an array of prominent artists including Hubert Laws, Horace Silver, Chick Corea, Michael Brecker, Buddy Collette, Bobby Hutcherson, Jimmy Smith, Benny Carter, Bobby McFerrin and many others, both on record and at many notable venues and jazz festivals in Northern California. See: www.nikarejto.co/