As the author of The Flute in Jazz it was my privilege to meet and interview many of the early pioneers of jazz flute performance. Since then, sadly, I have had to watch as, one by one, they pass away: Buddy Collette, Bud Shank, Herbie Mann, David Newman, James Moody–we have lost all of them in the last few years. On June 13th, 2013 they were joined by the man said to be the “father of jazz flute” as Sam Most succumbed to cancer in a Los Angeles hospital. The obituary that I wrote can be seen at:

Then, just a few weeks later Deju vu! while writing the obituary for Sam Most, and expressing my sadness at the passing, one by one, of a whole generation of jazz flute pioneers I found myself having to report the passing of two more giants in this field. Frank Wess and Yusef Lateef were both National Endowment for the Arts Jazz Masters, recognized for their work on both flute and saxophone. Had they ever performed together, their sounds would have blended beautifully. Apart from this, they could not have been more different. 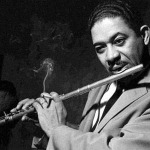 Frank Wess, who passed away October 30th, 2013 at age 91, is well known to Flutist Quarterly readers, having been featured in my extensive article, Frank Wess: Quintessential Jazz Flutist, in the Fall 2007 issue. I noted there the various firsts that characterized his career: first jazz flutist to undertake formal study of the instrument; first jazz flutist to win the prestigious Down Beat critic’s poll–under “Miscellaneous Instrument,” in 1959, and again the following year, in the newly-established category exclusively for flutists; first to popularize the sound of jazz flute, when he was featured on the instrument on numerous radio broadcasts with the Count Basie band between 1953 and 1964. Wess was, according to the distinguished jazz writer Leonard Feather, “The first jazz star to record extensively and with complete success as a flute soloist.” More recently, in 2003, Frank performed and recorded with one of the first multi-flute jazz ensembles, Flutology, where he worked with Holly Hofmann and Ali Ryerson. Ali sent me some reminiscences about Frank:

“I first met Frank in the late 90’s when we were both playing the London Flute Festival. After the concert, we enjoyed an Indian meal together. I listened and laughed all evening while Frank told me stories about his experiences on the road, including personal anecdotes about many of my jazz heroes. That evening was the beginning of a lasting friendship.

It’s not a stretch to say that music was Frank’s life. In all the years I knew him, if he wasn’t playing a gig, on the road, or recording, he was having a jam session with some young players at his New York apartment. The last time I heard him play was over a year ago, at Birdland. He hadn’t been well, he could hardly walk, his breathing was labored, but when he played, I could still hear the ‘Magic’ I knew and had long admired. I was reminded that night of how lucky I was to have worked with such a jazz icon. Along with his reputation as one of his generation’s great saxophone players, Frank Wess did more to establish the flute as a true jazz instrument than anyone had before him, thanks in part to the extensive radio play he received while working with Count Basie’s orchestra. For this, we jazz flutists owe him a debt of gratitude. 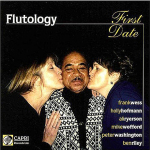 During the run of Flutology, the sextet with Frank, Holly Hofmann, and myself, I never once tired of listening to how thoughtfully and patiently he would develop his solos. Every note meant something. Frank was deeply rooted in the jazz tradition. Even so, his ideas never failed to sound fresh and modern. 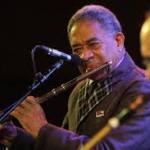 Frank was well-known for his wry sense of humor–a delightfully dry wit. One of my favorite Wess quotes: he was talking about a gig he’d played with a young, hotshot tenor player, a “young lion” with technique to spare. Describing his young colleague, Frank said, ‘he never met a note he didn’t like!’

Frank, we’ll miss you. Thanks for setting the bar so high.

Another NEA jazz master, Hubert Laws, himself a flutist, was also moved to send me some thoughts about Frank Wess:

I had the honor of playing the David Frost TV show with Frank Wess as part of the Billy Taylor group in the 70’s. I learned early in my life his part, along with James Moody, in pioneering the use of the flute in a jazz setting. Frank was an encouragement to me by merely hanging in there, playing this instrument even to the last of his life. Our connection was limited, but the impact and influence he has had remains on players throughout the world.

Here is Frank soloing on flute with the Count Basie Orchestra in Milan, Italy in 1960

And a more recent ballad performance — The Very Thought of You 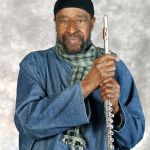 If Frank Wess was the epitome of a jazz musician, Yusef Lateef, who passed away December 23rd, 2013, at the age of 93, did not wish to be associated with the genre, at least in his later years. Having converted to Islam in 1948, he found the origins and ongoing associations of jazz–i.e. born in New Orleans brothels, performed where alcohol is served, etc.–both limiting and degrading. “‘Too much blood, sweat and tears have been spilled creating this music to play it where people are smoking, drinking and talking,’ he explained to The Boston Globe in 1999.” (Peter Keepnews, New York Times, Dec 24th, 2013.) He went so far as to ask me not to include him in my book The Flute in Jazz, even though, as I explained to him, it was subtitled Window on World Music, the genre with which he was more comfortable. I could not agree to his wish, however–I had to include him. (His chapter is entitled Yusef Lateef: “Gentle Giant’”of World Music, reflecting both the focus of his interests and the title of his 2006 autobiography, with Herb Boyd.)

Lateef’s early work on tenor saxophone was jazz pure and simple, representing the hard-edged school that emerged in the 1950s from Detroit, where he grew up, after moving from Chatanooga, Tennessee, where he was born William Emanuel Huddleston in 1920. Anyone hearing both Lateef and Frank Wess from their early recordings would have difficulty telling them apart, and no-one could say that Charles Mingus, Cannonball Adderley and Dizzy Gillespie, in whose bands Lateef worked in those early years, were anything other than jazz players. And, of course, he did end up as an NEA Jazz Master. Even before he moved to New York, however, it was becoming clear that his career was going in a different direction.

While still in Detroit, Lateef began to exhibit a lifetime interest in education, taking courses in flute and composition at Wayne State University. This trend continued in New York where he received a bachelor’s and a master’s degree from the Manhattan School of Music. He taught there, and at Manhattan Community College, in the 1970s and went on to earn a doctorate in education from the University of Massachusetts, Amherst, in 1975. The early 1980s found him studying and teaching in Nigeria.

Another trend, an interest in expanding his instrumental palette, also started with his early flute studies, and soon he was featuring the instrument with Cannonball Adderly’s sextet, among others. This was a time when the flute was beginning to assert itself. Frank Wess was featuring it with Count Basie, Buddy Collette with Chico Hamilton, Bud Shank with Stan Kenton, Leo Wright and James Moody with Dizzy Gillespie, and Lateef’s contribution was every bit as significant as theirs. He took the multi-instrumental approach a stage further, however.

In Detroit, Lateef had started to experiment with the oboe, an instrument that is still rare in jazz, and began to feature it with Adderley, and on the recordings he was making under his own name, beginning in 1957. The oboe was followed by the bassoon, even as Yusef continued to be noted for his hard-driving tenor saxophone work. Becoming established as leader of his own ensembles brought increased freedom for Lateef which led him into further explorations, essentially into what today we would call World Music, even though the concept was hardly known at the time. With his interest in Middle-Eastern, Asian and African music came an interest in the shehnai and the argol, as well as wooden and bamboo flutes of every kind. These instruments appeared with increasing frequency on his recordings, until his 1988 album Yudef Lateef’s Little Symphony, featuring many of them voiced together through overdubbing, won a Grammy for New Age Music, a category Lateef had never heard of! 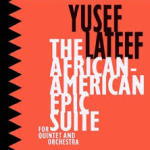 Following his foray into World Music, Lateef branched out into contemporary concert music. He recorded several large-scale compositions, including, in 1970, his seven-movement Symphonic Blues Suite and, in the early 1990s, his African-American Epic Suite for quintet and orchestra. As recently as April 2013, in a New York concert entitled Yusef Lateef: Celebrating 75 Years of Music, he presented new works for piano and for string quartet.

There was a lot more to Yusef Lateef’s life and music than the advancement of the flute as a jazz instrument, but it cannot be denied that he made an enormous contribution to this development. More important, however, with the passing of the “Gentle Giant,” the world of music has lost a unique individual whose like will not soon be seen again.

Here he is seen with the Adderley Brothers sextet, Live in Switzerland 1963, performing Angel Eyes

Peter Westbrook is the author of The Flute in Jazz: Window on World Music (Harmonia Books, 2011) www.fluteinjazz.com