Pioneers of Jazz Flute by Aleisha Ward
November 15, 2021 (No Comments) by Peter Westbrook 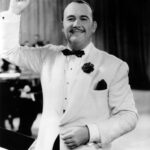 Although the majority of jazz flute histories focus on post 1950s jazz, the use of the flute in jazz is not as recent, or uncommon, as many writers claim. From the late nineteen–tens flute, and piccolo, were used in “syncopated” dance orchestras, ragtime bands, and in jazz-related vaudeville and Broadway– such as the Blackbirds revues. While the flute was, at times, written as a “classical” effect, particularly in sophisticated dance orchestras (e.g. Paul Whiteman), the writing usually reflected modern dance music trends.

Ten years after the first jazz recordings by the Original Dixieland Jass Band, the flute made its debut on a jazz recording. Many writers have disregarded these early examples of jazz flute, complaining that the flute was incapable of swing. This is absurd as it is the musician, not the instrument, that has the ability– or not– to swing. The first recording of jazz flute featured Cuban flutist Alberto Socarras in the Clarence Williams band on Shootin’ The Pistol, July 1927. 1 On this piece Socarras plays an obbligato–-reminiscent of the dixieland clarinet style-–with the ensemble, and solos. Socarras’ playing is convincingly proto-swing in both rhythm and improvisation. 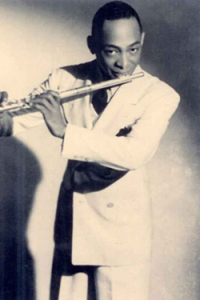 Alberto Socarras was born in Manzanillo, Oriente, Cuba on 19 September circa 1908. 2 He received lessons on flute and clarinet from an early age, and taught himself saxophone from Rudy Wiedoeft’s records. Socarras immigrated to the United States when he was eighteen and found work in dance and theatre orchestras. He soon met bandleader Clarence Williams and was invited to join his jazz band. His recordings with Williams are quite varied, ranging from accompanying vocalists to popular instrumentals, and jazz. Over the next four years Socarras recorded eight pieces that feature flute prominently.

The often-heard complaint about Socarras’ improvisation is that he is too classically influenced, and while he was classically trained, Socarras also played Cuban charanga. It is this style that appears in some of his improvisations (for example the obbligato line on You’re Such A Cruel Papa To Me) rather than classical influence.

Socarras recorded rarely on flute, mostly with Williams.  However he did record with Walter Bennett’s Swamplanders in 1930 and with Russell Wooding’s Grand Central Red Caps in 1931. His flute work on these recordings is a mixture. His solos are early jazz influenced, some may be termed proto-swing, but most are a mix of charanga style melody and early jazz rhythm, such as on You Can’t Be Mine And Somebody Else’s Too with Bennett’s Swamplanders.

With the popularity of big bands in the early 1930s flute in jazz became a rarity. In fact the two notable exceptions of Wayman Carver in the Chick Webb Orchestra and Walter “Foots” Thomas in Cab Calloway’s orchestra stand out as being extraordinary for this period. 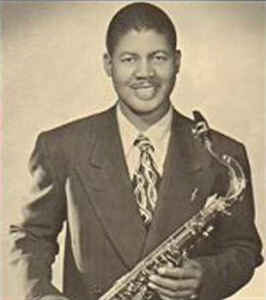 Walter Thomas was born on 10 February 1907 in Muskogee, Oklahoma. Like many other musicians, he began his career by playing in high school band (Kansas Vocational Institute), on several instruments. The music teacher, William Dawson, stressed the importance of mastering theory as well as their instruments. When Thomas graduated he was in demand with local dance orchestras because he could read difficult arrangements easily. Thomas also worked with Fate Marable on riverboats from St. Louis, and with Jelly Roll Morton before joining The Missourians in 1929 (later the Cab Calloway Orchestra). Here Thomas found his niche as low saxophonist/ flutist/ arranger. When Calloway took over the orchestra Thomas added musical director to his role.

His first recording session on flute with Calloway was 12 November 1930 on Yaller where Thomas’ flute appears in an ensemble line. Perhaps the clearest recorded example of his flute work is on the Calloway Orchestra’s March 1931 recording of Ellington’s Mood Indigo. The flute is prominent in the scoring; unfortunately there is no solo and the part remains through-scored. This piece is an exception in the Calloway repertoire, being one of the few instrumental works that they recorded and performed. As most of the Calloway book involved vocals, the arranging reflected that and most of the arrangements that utilise flute feature it behind the vocals.

Thomas does not play flute on many of the Calloway Orchestra’s recordings, and it is unknown whether flute was utilised more in performance. After 1940 Thomas does not record flute again. Although this is a small legacy, it is made particularly significant by the integration of flute into a big band setting, an achievement matched only by the Chick Webb band until Frank Wess began to play flute in the Basie band in the early 1950s.

Wayman Carver first recorded flute in 1931. In contrast to Walter Thomas, Carver began his recording career in smaller group settings, giving him the opportunity to be featured more prominently. His first flute recording was 9 June 1931 with Dave’s Harlem Highlight on Loveless Love in which he has a solo after the theme statement. This solo, when compared to Alberto Socarras’ playing of a similar date, is considerably more modern and complements the swing aesthetic. 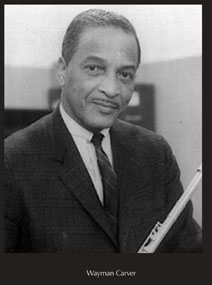 Wayman Carver was born on 25 December 1905 in Portsmouth, Virginia. He soon displayed an aptitude for music and was taken under the wing of his father and uncle (Derrick Copeland). Both men were active in the Portsmouth Metropolitan Marching Band. As the local music teacher, as well as Carver’s uncle, Copeland was the logical choice to start teaching Carver music.

Carver began playing flute when he was fourteen, and was soon playing in small combos as well as the Metropolitan band on clarinet, saxophone and flute. He was noticed by a teacher (Sykes) from the Haven Music Conservatory in Mississippi, who secured a scholarship for Carver to attend Haven, after graduating from high school. At Haven, Carver gained experience in ensemble and solo work; when Sykes left Haven to join the faculty of Clark University Atlanta, Georgia, Carver went with him.

At Clark he was active in many ensembles, his musical range running from classical to jazz. While he continued to play reed instruments, he majored in flute. After graduating from Clark in 1929 Carver left Atlanta to head to New York.

Carver toured with Montgomery’s Collegiate Ramblers and led his own band working his way to New York. After arriving, Carver worked with Spike Hughes and Benny Carter before joining the Chick Webb Orchestra in 1934.

With Spike Hughes, Carver recorded four tracks on flute in May 1933. On two tracks, Arabesque and Firebird, Carver plays in the ensemble on the themes and has some short solo breaks. On the other tracks, Sweet Sue and How Come You Do Me Like You Do? he plays in the ensemble and solos on each. Both of these solos capture how modern his playing was. In October 1933 Carver recorded with the Benny Carter Orchestra on Devil’s Holiday. His solo here demonstrates that the flute was a valid jazz instrument.

Carver’s first recording session with the Chick Webb Orchestra on flute was in July 1934 on the track If It Ain’t Love behind the vocals and in the upper harmony. As with the Calloway Orchestra, the flute is featured only occasionally in the Webb Orchestra, mostly scored with the reeds or vocals. There are, unfortunately, few flute solos with the full orchestra, but these give tantalising glimpses into how flute could be successfully integrated into a big band.

In 1937 Carver began performing with the small group within the orchestra: Chick Webb and his Little Chicks. Carver made five recordings with this group and all tracks display his improvisational abilities clearly, but his solos on I Got Rhythm * and Sweet Sue, Just You are particularly interesting.

After Webb’s death in 1939, Carver remained with the orchestra until 1940 and returned briefly in 1941. During this period Carver recorded a few small flute solos with the full band, but most work was in the ensemble. After leaving the Webb band Carver retired from full time performing and taught music at Clark University, eventually becoming an associate professor.

While Walter Thomas and Wayman Carver make up the bulk of the flute recordings in the 1930s there are two other recordings that should be mentioned. The first is from April 1936. Charles Frazier, a little known saxophonist/ flutist, with the Willie Bryant Orchestra on The Right Somebody To Love. The flute is only featured on two short solo breaks and appears to be influenced by Wayman Carver.

The second is the flute trio from the recording of Liza (All The Clouds’ll Roll Away) by the Jimmie Lunceford Orchestra, September 1939. This is notable for the scoring of a flute trio in a jazz setting. It also remains one of the few jazz arrangements to utilise flutes in this manner.

The early history of the jazz flute has a lot to offer fans. While there are no iconic improvised solos, jazz encompasses improvisation, and writing, and musicians’ interpretation of written music is just as important as the improvisation, especially in this early era.

1. It should be noted that since the writing of this article in 2007 discographers have made discoveries of earlier recordings that purport to include jazz flute. I have not had the opportunity to listen to them and judge for myself if the flute is jazz influenced or not. For more information see Cary Ginell’s discographical work on jazz flute in particular.

2. Socarras stated at various times that he was born in 1901 or 1908. The writer and Cuban music specialist, Leonardo Acosta believes that Socarras was born between these two dates. 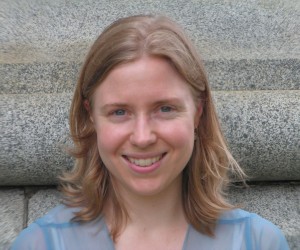 Aleisha Ward is Flute Journal’s sub-editor for Australiasia. She was one of the first graduates of the Bachelor of Music in Jazz Performance at the University of Auckland (2003), New Zealand. She holds a Masters of Arts degree in Jazz History and Research from Rutgers University, New Jersey, USA (2006), under the supervision of Dr. Lewis Porter, with her thesis focusing on the early history of jazz flute. Aleisha has recently graduated with a PhD in music from the University of Auckland where her thesis was on jazz in New Zealand 1920-1955. She is a freelance writer and editor, occasionally lectures and tutors music history courses and works in the music library at Auckland University. She writes about jazz in New Zealand, among other music-related topics, on her blog at nzjazz.wordpress.com

* Wayman Carver and the Little Chicks can be seen/heard performing I Got Rhythm here: