A. Review by Peter Westbrook: 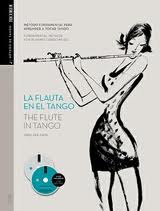 In 1950, a 24 year old college student named Irv Kratka issued a series of five recordings of Schubert’s Trout Quintet, each with one instrument omitted, to be filled in by a student playing along. This was the first “play-along” recording, and the beginning of Music Minus One, still going strong today with over 900 albums in various genres. In 1967, Jamey Aebersold followed with his jazz Play-A-Long series that is now a standard resource for jazz educators in many countries. Other publishers and individual artists have followed (I am a big fan of Paquito D’Rivera‘s Music Minus Me books on Cuban and Brazilian jazz), until today play-along music books, CDs and DVDs have become a virtual cottage industry. With her new book, La Flauta En El Tango, Paulina Fain has made the first contribution to this genre in the area of tango music.

Tango sprang up in the 19th century as a result of the interaction of European and African cultures in the clubs and dance halls of Buenos Aires–just as charanga developed in Havana, choro and samba in Rio de Janiero and jazz in New Orleans. Later interactions with jazz and European classical forms, as well as innovations in approach to the dance itself, led to the development of Tango Nuevo, best known from the compositions of Ástor Piazzolla. Piazzolla’s work is well known to flutists, with several major compositions for flute and other instruments arranged for it by others. Within the tango tradition, however, the flute made only a brief appearance, as Fain tells us in her introduction, during the Guardia Vieja (Old Guard) period from the late 19th century until around 1905, when it was eclipsed by the more flexible bandoneon. The flute is making something of a comeback in tango now, however, boosted by the First International Tango Meeting for Musicians, organized by Ms. Fain in Buenos Aires in July. Moreover, the flute community is now realizing that working in such areas as tango can add dynamism and color to flute performance in general. 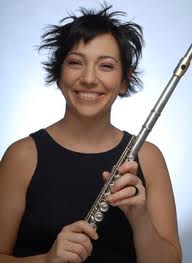 I can’t think of a better introduction to the genre than this book. The result of three years of work, it is a meticulously thought-out presentation, beautifully realized by the publishers, G. Ricordi & Co. of Munich. Written in both Spanish and English throughout, the book includes two CDs with recordings of the examples found in the text, as well as a separate booklet labelled as “Piano Parts.” This actually contains the piano and flute parts of several compositions by Ms. Fain that illustrate the fine points of performance for the tango, both traditional and contemporary, as well as for the closely related forms, the vals and the milonga.

This is much more than just a play-along album. It is, in fact, designated by the author as a “fundamental” study method. After an introduction explaining the limitations of notation in capturing the nuances of the music, Ms. Fain takes us through a series of sections devoted to conveying the basics of these nuances: melody, expression, phrasing, rhythm, articulation, etc. There are additional sections on ornaments, extended techniques, ensemble playing, the history of the flute in tango and a comparative table of tango styles. An appendix contains a glossary, index, references and a table of typical rhythmic patterns. At the end of each chapter are exercises, tips, referrals to the audio selections which contain tracks for listening and for playing along, and an original work for flute and piano by the author illustrating the concepts within the chapter. The author has really overlooked no detail in producing this volume, which is to be part of a series for various instruments.

Whether your interest is learning to play this most appealing style of music, or simply expanding your musical horizons, La Flauta En El Tango would be a most valuable addition to your library.

This review first appeared in Vol. 39. No. 1. (Fall 2013) of Flutist Quarterly, the magazine of the National Flute Association, and is used by permission. See: www.nfaonline.org

B. Jessica Quiñones has studied Tango with Paulina Fain in Buenos Aires. She offers a second opinion on La Flauta en El Tango 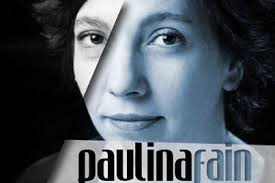 While the flute has had a curious presence in tango history, the resurgence of interest in the genre coupled with Argentina’s 2010 bicentennial celebrations has seen a host of new books published for aspiring tango musicians in the past few years. This publication is part of Ricordi’s Método De Tango series that includes similar studies for piano, bandoneon, violin, bass and guitar. As Astor Piazzolla’s repertoire for flute is frequently recorded and performed, Paulina Fain‘s La Flauta en El Tango is a welcome addition to understanding the world of tango performance practice.

Fain, who is one of Argentina’s celebrated tango flautistas, offers a bilingual method for musical interpretation that dives beyond the notation of a traditional tango score. Fain uses popular tango songs, such as Malena and Naranjo en Flor, as  foundational melodies, and then suggests tango techniques to enhance the music for a more ‘authentic’ approach to interpretation. Many of the most common tango techniques happen to be very similar to ones used in jazz and folk styles and are easily accessible for Grade 6 players and above. The book comes with two audio CD’s that provide extensive audio examples of the author demonstrating the numerous possibilities for musical expression, as well as backing tracks for solo experimentation. Topics for study include the arrastre, accents, ornamentation, semi-slurred tonguing, and harmonics. 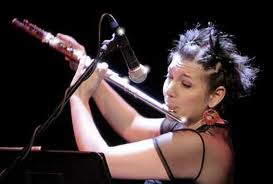 Two notable compositions that will surely be crowd pleasers are included within the book and are written by Fain: Microcentro, which mimics the sound imagery of Buenos Aires street- life through exciting percussive effects, and La Embrujada, a tango waltz which includes quirky tango idioms and pitch bends.

Many tango players learn the genre’s style by mimicking older orchestral recordings and Fain discusses popular orchestral styles and tango artists for future study. As the learning of tango performance is usually one of an aural and oral tradition, Fain’s comprehensive book brings the flute in tango back to centre stage for players of all musical backgrounds.

Below, a clip of Paulina Fain with pianist Ezequiel Mantega: