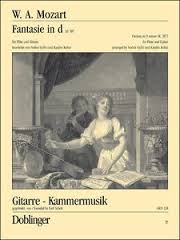 This publication from Ludwig Doblinger is a transcription for flute and guitar of the Mozart Fantasie in D minor for piano. It is the first in a projected series of such transcriptions by the duo of flutist Noémi Győri & guitarist Katalin Koltai. This is of particular interest at International Flute Journal as we develop reference material in all categories of flute repertoire. As Győri and Koltai write on their website  http://classicalfluteandguitar.com:

The Classical flute and guitar project aims to create a new canon of the ensemble, introducing the formation with our own transcriptions of Viennese classical keyboard works that represent the finest compositional techniques and musical rarities from the time the flute guitar duo was born. We aspire to redefine the historically developed perception and attitude to the duo, and to present the musical possibilities provided by the elaborate instruments in use today, which enable us to highlight the true, chamber music, qualities of these instruments and to appreciate the flute and guitar to their fullest potential. 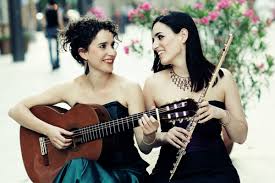 It will be very interesting to see how this project unfolds. A glance at Kristi Benedick‘s Ph.D. dissertation An Annotated Guide to Flute and Guitar Music (which we hope to make available to our readers) lists over 100 pages of music for this combination, including a number of transcriptions from Mozart, so there is no shortage of repertoire in this area. What Győri and Koltai are aiming for is a specialized niche within this repertoire, focused on The Vienna of the late 18th and early 19th Centuries. They write:

This era is often recognized as the guitar’s “golden age”, the time when the modern classical guitar was established, primarily through the activities of Italian guitarist and composer Mauro Giuliani. Giuliani was a major figure in the propagation of the flute-guitar duo and composed the greater part of his works for this formation between 1806 and 1819, while living in the Austrian capital. 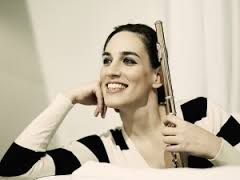 For their first piece, they have chosen a composition that works beautifully for flute and guitar and have produced their transcription with great care. Running for a little over six minutes, the piece contains a surprising range of contrast, as the authors put it    “. . . a wide range of emotions and dramatic variety,” alternating between Andante and brief Presto passages. The opening arpeggios for the guitar require quite some stretching of the left hand, but overall the piece is eminently performable. There is some doubt about the form of the original piece — the last few measures may have been added by August Eberhard Muller — as well as Mozart’s intentions for it, so discussions about “authenticity” are redundant. Readers can compare the duo’s performance with one version of the original piano composition below. All such discussions aside, I would agree with Győri‘s assessment that the piece “sounds very natural and legitimate on these two instruments, offering all possibilities for them to showcase their versatile musicality and infinite shades of sound colours.”

There are probably many flute/guitar duos; most would do well to have this piece in their library.