Some weeks ago we received a recording, Silver Whispers, by Marc Adler. It is reviewed below. Another recording, All in a Day, by the same artist, has just been released and is reviewed here.

These, and the other recordings reviewed here, are example of how much talent, in the jazz world, exists away from the limelight. Flutist Marc Adler lives and works in the Philadelphia area where  he has focused his attention on developing his musical skills in the area of jazz improvisation and composition. He holds Bachelor and Masters degrees in Music from the University of the Arts and Temple University respectively, developing his musical expression through the flute, alto flute, bansuri, Native American and other assorted flutes, developing skills as a composer/arranger, while also writing for various jazz-related publications. Working with grants and fellowships from such entities as the National Endowment for the Arts and the Pennsylvania Council on the Arts, Marc has been able to develop his own high-quality recording projects while appearing as a sideman with a wide array of artists (including the Ali Ryerson’s Jazz Flute Big Band at the National Flute Association conference in 2013) and contributing compositions and arrangements for various ensembles. These, his most recent recordings speak to the originality of his contribution to the flute in jazz.

When Marc‘s new recordings arrived for review I first went back to his earlier CDs in my collection. 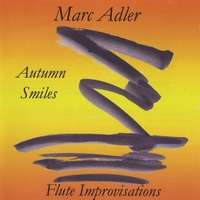 Autumn Smiles – Flute Improvisations was originally released in 1995 simply as Flute Improvisations and was well received at the time. It was financed in part by a Jazz Fellowship from the PA Council on the Arts and the original compositions reflect a wide range of emotions and life experiences. Flute Improvisations placed #6 in Temple University’s Jazz-FM WRTI, Top 10 New Releases for March 1996. Most of the players still live in the Philadelphia metropolitan area and have gone on to have successful careers as jazz musicians in the areas of performance and composition/arranging. 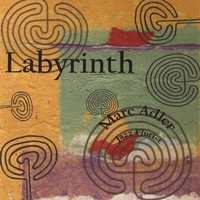 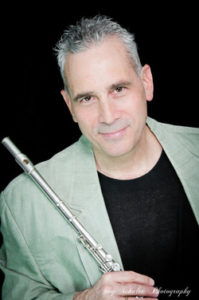 Adler writes: “Labyrinth came about as the result of a Jazz Fellowship from the PA Council of the Arts. I used the recording as an opportunity to explore techniques and harmonic concepts I had been developing over the years. ” In fact, both of these recordings exhibit a keen imagination applied to a very contemporary style, a style summed up by Adler himself: “As a jazz flutist,” he writes, “I have a unique identifiable style that places a high value on the improvised line, extended techniques and a sophisticated and continually evolving approach to harmony, using both traditional and nontraditional structures for creative improvisation.”

In trying to imagine such a style, one need only learn that, apart from his formal degrees,  Adler studied privately with both Harold Bennett and Eddie Daniels. While most Flute Journal readers will be familiar with Bennett, formerly principal flutist with the New York Philharmonic, a man who, according to Jim Walker, “. . . left a powerful legacy of beautiful flute playing and extraordinary teaching,” Eddie Daniels is better known for reviving the clarinet in jazz and holding down top chairs in jazz ensembles playing the tenor saxophone. Less well known is the fact that Daniels plays the flute at a very high level and, more importantly, is a remarkable teacher of jazz improvisation. So it is that Adler is a highly trained classical flutist with an advanced concept as a soloist that he displays against the background of his own compositions and arrangements that reflect similar skills. Supported by a cast of largely local — to Philadelphia — but equally accomplished musicians, the result is two albums that belong in the collections of anyone interested in the flute in jazz, even though they have not received the recognition they desire. 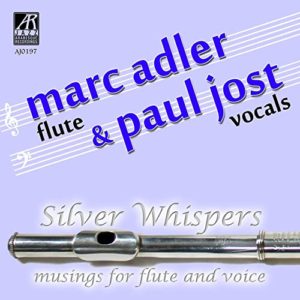 Fast forward five years and another project emerges that displays Adler’s concept, but in a rather unusual context, a duo with vocalist Paul Jost. He describes the background to this recording:

“Paul and I met on a gig with the Philly based world music band Siora and connected musically right away! We decided after the gig to try to put something together and thought that it would be a nice challenge to record some selections as just a duo. Flute has always worked nicely with voice and Paul had additional skills as a percussionist and guitarist. The result is four evocative and unique interpretations of jazz standards that are complete musical worlds – engaging the listener both emotionally and intellectually.” 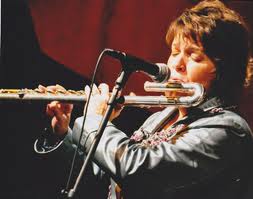 To some degree, performances such as this are appearing more frequently, often for purely economic reasons. While quartets and quintets were standard in many jazz venues over the years, we find many jazz artists being forced to work with more modest forces, two cases in point being jazz flutists, Holly Hofmann who often works as a duo with her husband, pianist Mike Wofford, and Ali Ryerson who also worked with a duo — with guitarist  Joe Beck — for some time. Even solo flute performances are not unheard of by jazz artists such as Mark Alban Lotz from the Netherlands. Perhaps by coincidence this writer recently formed a trio with woodwinds, vocalist and guitarist, while flutist Lori Bell‘s most recent recordings also involve duo and trio. 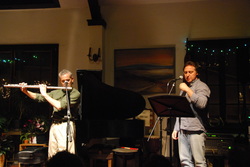 The Adler/Jost duo is remarkable in its own way. Duos such as those cited above still tend towards a soloist/accompanist relationship. That in itself would be interesting to hear in Marc Adler‘s case, given the oblique nature of the lines he tends to play against the rhythm sections in his previous recordings. What sets Silver Whispers apart is that his partner here, Paul Jost, has a similar approach as a vocalist. As a result, the two soloists produce an ongoing, oblique duet with each entwining lines around each other. These are standard tunes — Days of Wine and Roses, Stella by Starlight, Body and Soul — songs that have been interpreted hundreds of times by jazz players, Freedom Jazz Dance perhaps less so. But these interpretations are quite different. Jost is known not only as a vocalist, but also as a drummer and composer, and he is credited with three of the four arrangements and produces percussion sounds and other effects as part of the overall mix. In this context, the two voices, with Adler on flute and alto flute, dance around each other and the structure of the pieces, snatches of the well-known melodies and the lyrics emerging just enough to reveal the identity of the songs. 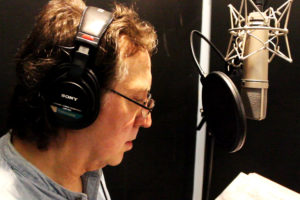 The end result is, at the same time, both a highly unusual set of performances and a tour-de-force. It will not be to everyone’s taste, and it is only half a normal recording — four tunes, a little over 20 minutes. But in Silver Whispers Adler and Jost are virtually inventing a new genre within the jazz realm and their efforts deserve attention, particularly, again, from anyone interested in the flute — not to mention the vocal — in jazz.

Copies of Silver Whispers are available from:

Below, from the recording: Days of Wine and Roses: