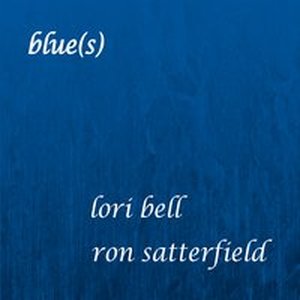 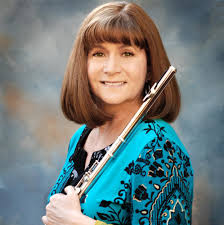 Flute Journal readers will be familiar with Lori Bell, from our 2018 review of her classical and jazz recordings, Night Soliloquy and Brooklyn Dreaming. Now Lori has issued two new recordings that take a different direction. Her performances here as a jazz flutist work beautifully in a new context, while retaining all the qualities we noted previously — tremendous technical mastery and great melodic imagination.

As we noted in reviewing Marc Adler’s Silver Whispers CD, there is considerable economic pressure on jazz performers making it increasingly more difficult to support the quartet or quintet ensembles that have become standard in modern jazz. We cited jazz flutists such Holly Hofmann and Ali Ryerson who have done a good deal of work in a duo context, Ali with guitar, Holly with piano. It goes without saying that successful jazz performance with a duo requires more than merely leaving the bass player and drummer at home.  Lori Bell has taken a different approach and, with the help her truly accomplished partners, produced something quite striking. 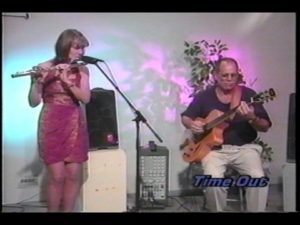 Given the amount of music written for flute and piano, or flute and guitar, classical players may wonder why a duo format presents such problems for jazz players. This is because of a lack of understanding of the role of the jazz rhythm section, typically piano, bass and drums. Each of these instruments has a specific role to play, and when they function together effectively, the music has harmonic integrity and, perhaps even more importantly, fluid rhythmic motion. The key to these factors is essentially the bass player, who provides the harmonic bass line which is integrated with the chords from the pianist or guitarist, but who also has to place the notes in such a way that the music has that sense of effortless flow or ‘swing.’ For a single accompanist to provide all this is not easy, plus he or she has to forgo support for their own soloing. This is what Bell has had to deal with to work with a duo. 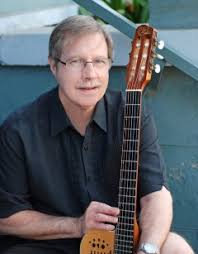 Enter Ron Satterfield. Working with Lori Bell on both of these recordings, he exhibits great skill as an accompanist, freeing up Lori to freely exhibit her skilled imagination to the fullest in her solo work. Indeed, the first impression upon hearing blue(s), especially for a flutist, is the cascading inventiveness of Bell’s flute and alto flute, as she works through this rather unique program — jazz standards from the likes of Thelonius Monk, Miles Davis, McCoy Tyner and Oliver Nelson, along with her own originals and the stunning blue by Joni Mitchell.

On further listening, at least in my case, it started to emerge just how much Satterfield has contributed to this effort. In place of piano, bass and drums, his guitar supports Bell’s flute all the way, with a combination of chords, driving bass lines, and then — his secret weapon — vocal lines, whether scatting or, on a tune like blue, interpreting the lyrics. It is a very selfless approach to performance as it is primarily Lori who shines. But without his subtle accompaniments, she would never be able to stretch out as she does, and present us with a fabulous display of flute improvisation. The end result is that there is almost more Lori Bell here than on her other, more conventional, recordings. Anyone interested in the Flute in Jazz should listen to this very carefully. 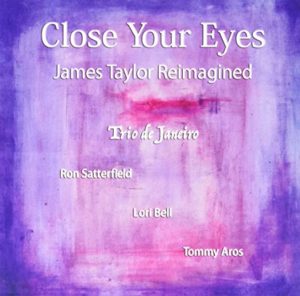 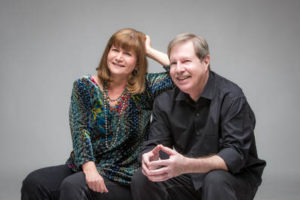 After 25 years working together in a variety of settings, Lori Bell and Ron Satterfield have explored many facets of repertoire and performance. That is evident in their new recording Close Your Eyes: James Taylor Revisited. To begin with, the duo is expanded into a trio with the addition of percussionist Tommy Aros, to become Trio de Janeiro. In addition, the repertoire centres on the work of singer/songwriter James Taylor.

It may come as some surprise to learn of James Taylor, the composer of Gorilla and Mud Slide Slim, can provide material for jazz improvisation, but as this writer has recently learned in working in a similar trio format, the work of Joni Mitchell, Roberta Flack and Carol King contain great riches for those who learn to fathom it. 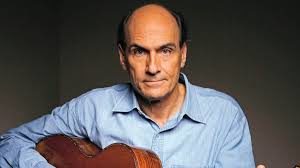 Here the subject is James Taylor, an artist perhaps even less accustomed to a jazz treatment. But the trio has approach the task with a radical technique. They do what jazz players do, adapt their skills to the material, and out of James Taylor and jazz they conjour a genre unique unto itself and exploit it for all the artistic integrity it possesses. And, perhaps not surprisingly, James Taylor yields a great deal. The roles of the trio have shifted slightly from the blue(s) setting. As these are songs with lyrics Satterfield‘s vocals take centre stage, Bell‘s flute adds colour in obbligato and  solo and Aros‘ drumming, while always understated, would be missed if it were removed.

Overall this is a recording that exceeded my expectations for enjoyment. There is more than enough of James Taylor here to delight his fans; Satterfield‘s voice is easily close to Taylor‘s at times. Lori Bell is a always a delight, with a lovely sound and constantly inventive, even surprising turns of phrase. And the Trio de Janeiro is a highly integrated unit that shows what musicians who are schooled in the arts of improvisation can do in getting inside world music of every kind and making it their own.