Joaquin Oliveros – An Interview by Maddy Shaw
June 5, 2019 (No Comments) by Ganved14 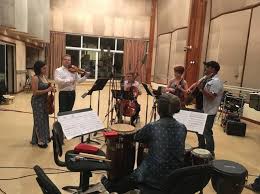 I first meet the great Cuban flute player Joaquin Oliveros in Abdala Studios, Havana.  This hub of Cuban creativity is an unassuming cream coloured building set back from the road on one of the wide leafy boulevards of the Miramar district of Havana.  There is a glimpse of gently rolling blue at the end of the street.  All roads here lead to the Malecon, where Havana sits back and looks out to sea.

Inside the studios it is mercifully dark and cool, out of the intense sun. High octane, bright colour photographs of Cuban musicians adorn the soft navy walls of the hallway. Men captured in a moment with trumpet and tres guitar; women holding maracas and guiro, wide mouths singing.  Silent fragments of exuberant past performances. 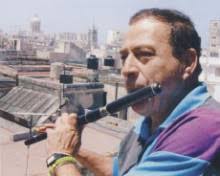 The café-bar at the studio is full of the comings and goings of Cuban musicians and visitors, eager to play and hear Cuban music.  There’s a buzz as they order drinks, joke and smoke in the small courtyard, lounge on the brown leather sofas – all flip-flops and jeans.  In the midst of this easy-going activity, Joaquin relaxes at a dark wooden table and chair by the bar with small cup of the Cuban coffee – strong and sweet.  Though it is 30 degrees in the shade, Joaquin is impeccably dressed in a crisp ironed short-sleeved shirt; pressed grey trousers with a knife edge crease; his shoes highly polished; hands manicured; dark hair short, just-so.  This veteran of Cuban flute sits tall in his stature.  He seems a classic from another era.  I’m reminded of the iconic cars cruising along the pot-holed Havana streets, past the newly emergent pizza places and the open top tourist buses. He smiles readily, with a twinkle in his eye.

I ask him about his life as a flute player.  He tells it something like this. 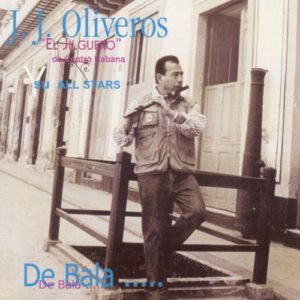 “I was born in Central Havana in 1945 – the younger son of my parents.  My older brother was not musical and pursued a career in the military.  My first musical experience came at kindergarten where one of my teachers was a violinist in a symphony orchestra.  This teacher decided to create a band so the children could learn percussion.  I showed an aptitude and the teacher focussed her attention on me.  Then, in the early 1950s we moved and lived in a flat on the corridor.  I had a whistle, and would play on it all day until the neighbours shouted at me to stop.  The radio was always on.  I grew up listening to Arcano y sus Maravillas (ed: a Cuban Charanga flutist who led one of the most popular and prolific danzon orchestras).  By 8 years old I knew that I wanted to play flute.

“When I was 13 or 14 years old my family moved a few blocks from the Tropical club (ed: a popular large open-air music venue in Havana, not to be confused with the Tropicana).  From our flat I could hear the performances and I would listen to try to make out the bass and the flute because I could hear them most clearly.  I was not allowed into Tropical – I was under-age and I had no money anyway – so I and my friends would sneak in over the wall at the back.  Time and again we would be caught and thrown out, but we would wait a bit then climb right back in again to listen to the bands. We did this every Friday, Saturday and Sunday night.  I was mesmerised by the flute. 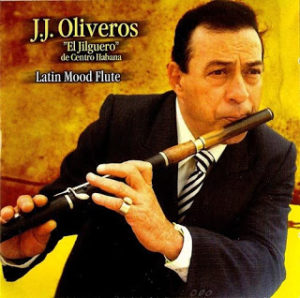 “A Charanga flute player Nano Gonzalez lived nearby.  I would watch him rehearsing.  One day I asked him where I could buy one of the Cuban Charanga flutes (ed: traditional simple system wooden five key flutes used in Cuban Charanga music).  He said he had an old one which I could have for 25 pesos (moneda nacionale). This was an enormous amount of money at the time, but I got the money together. This was my first flute.  I said to Gonzalez that I wanted to be in a Charanga orchestra and to improvise like him. He said that first I must learn to play congas – in order to be able to play flute and to improvise. I asked why – I just wanted to learn to play flute. He was adamant: to be a Charanga flute player and to improvise properly I had first to be able to understand and play the Cuban rhythms. So this is what I did.

“When I was 15, I told my father I wanted to play music professionally. My father said: ‘OK, you can do it, but you must play properly. You cannot go out with your friends and play in the street all the time – you must work on your music.’  So, I went to the conservatory in Havana where I learned to play the silver concert flute, studying with Roberto Ondina.  I continued playing the wooden flute back home.

“In 1961 I got my first break.  I was playing at a party when I got the word that Rolando Valdes’ Orquesta Sensacion wanted me to play for a radio show, and I joined the orchestra after that.  When I started playing with them it was very difficult.  I used to play mainly by ear – my music-reading was OK but it needed work.  Luckily, the most important thing was that I could improvise and this is what the orchestra wanted.  I used to spend hours and hours at home playing along with the improvisation on the radio – from early morning to late at night.  The improvisation was in the third and fourth octave on the flute.  I used to drive my neighbours crazy.

“After that, the opportunities kept coming.  I played with Enrique Jorrin and his orchestra – the creator of the Cha-cha-cha, and with several other orchestras in Havana.  In 1990s I played and recorded with the Frank Emilio Latin Jazz Quintet and went on tour with Chucho Valdes to Europe and the USA (ed: including at Jazz at Lincoln Center, New York) as well as recording my own albums.  Frank Emilio was a gentle, charismatic man – he was wonderful to be with and to play with.  This was a great time.” 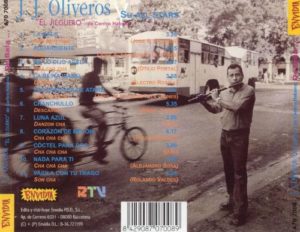 The light shines in through the red and blue glass in the windows. The studio is quieter now in the afternoon heat. The musicians have drifted away into the different studio rooms, and the sounds of the montuno can be heard faintly.  I ask for his advice.  For all of us around the world – for those of us who did not grow up in Cuba but who are in love with the music from this brilliant, crazy island – how do we play Cuban flute authentically; where do we even begin?  He considers carefully before he answers.

“First, you must get the rhythm. This is essential. It is fundamental to hear and understand the percussion and its rhythms.  Second, you must focus on the different voices in Cuban music.  Try to imitate the colour of the bell – it is similar in pitch and timbre to the Cuban flute.  Thirdly, you must listen. You must listen to a lot of Cuban music to be able to perform – to get the emphasis; to hear the subtleties; to be able to improvise convincingly.” 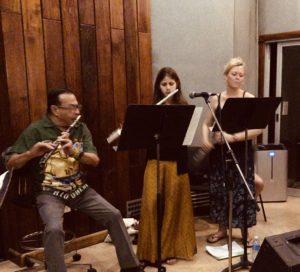 So, later on, I listen. Over the interlocking percussion rhythms of a Charanga piece built upon the main theme of Gershwin’s Rhapsody in Blue, Joaquin improvises freely on his antique five key ebony flute, supplemented for now with a silver head-joint.  It is easy to hear why his nickname is El Jilguero – after the songbird Goldfinch.  He plays with a clean, clear timbre in the very highest skies of the range – flying impossibly high. His percussive improvisation is nimble; his articulation assertive; the musical ideas framed beautifully with space.

Later still, I offer to buy him a coffee. He refuses, of course, and insists on buying me one instead.  Ever the gent: he is a class act.

With thanks to Ana Sanchez-Cano for interpreting. Ana is a flutist from Madrid currently based at the School of Oriental and African Studies, University of London.

Maddy Shaw is a flutist working in London with a particular interest in jazz flute and improvisation.  Maddy worked as a barrister for many years before changing career to concentrate on developing as a musician.  She recently graduated from Guildhall School of Music, and is the founder, director and band leader of the Girl Plays Jazz Project introducing girls and young women to jazz improvisation.”