The Jazz Flute Big Band – UK (or JFBB-UK) appeared Nov 20th at the London Jazz Festival. It was warmly received by an enthusiastic audience at the Spice of Life venue in the center of London’s Soho district. 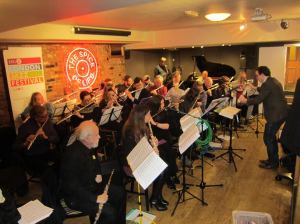 After just over a year of development, JFBB-UK has ensembles in London, Liverpool and, coming soon, Birmingham. All three groups were represented in the ensemble appearing at the prestigious festival, although with so many overseas guests, it was eventually billed as Jazz Flute Big Band International.

Having performed with the JFBB at National Flute Association conventions several times under Ali Ryerson and Billy Kerr, Flute Journal editor Peter Westbrook, upon returning to England after 40 years in the USA, decided to form a JFBB in London.

In co-operation with Jonathan Myall of Just Flutes of London, Flute Journal brought Ali Ryerson to kick off the program with a workshop in October of last year. This was well attended and highly popular so more meetings and concerts were organized. Over the past year, there has been much progress. There have been several more workshops, run by prominent jazz woodwind artist Andy Panayi and two club performances in central London. The workshops have been held at the group’s permanent home of The Vibe/All Flutes Plus and the concerts at two of London’s most prominent jazz venues, the Spice of Life in Soho (2 blocks from Ronnie Scott’s) and the 606 Club in Chelsea. 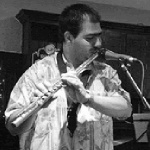 In addition to the activities in London a separate JFBB ensemble has formed in the Merseyside area. Under the direction of award-winning conductor and bandleader Phil Shotton, JFBB-Liverpool has given its first public performance and now holds bi-weekly workshops with a membership drawn from local music professionals and educators.  A third ensemble is in the planning stage at England’s second city, Birmingham.

JFBB members are also becoming engaged in the education process.  A JFBB educational package is being designed for use both in schools and in colleges and conservatories. With its emphasis on bringing together classical and jazz artists, this project has a role in the effort to break down the barriers between these genres, especially in the education process. 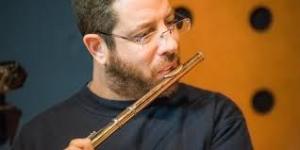 For their London Jazz Festival performance, the ensemble had not only a national but an international flavor. Phil Shotton, who conducted the session, as well as the rhythm section, were drawn from the Liverpool group. They joined members from London to make up the ensemble which also included members from Italy, Australia, Canada and South Africa. A special guest, Mattan Klein, came from Israel for the event.

As Peter Westbrook reports, “We took a bit of a risk putting this date together. This was the final day of the London Jazz Festival so there were about 40 other concerts going on that same evening, including Wayne Shorter downtown at the Barbican Centre and (US flutist) Lew Tabackin at the Pizza Express club about 5 minutes away in Soho. Plus, several of our key players, including Andy Panayi and Andy Findon were occupied elsewhere 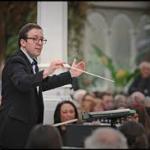 Fortunately, Phil Shotton was available to step in, although he and the rhythm section of Tom Sykes, Adam Dutch and Jonny Dale had to drive down from Liverpool to do the gig. They were joined by four more flutists from the Liverpool group, Gemma Blackburn, Sarah Queen, Sarah Lofthouse and James Bullock, who came along to complete flute and alto flute sections. It was a four or five-hour drive each way so they really made an effort to be there. And Phil only had a couple of hours to pull this whole thing together after the two groups got together on Sunday afternoon.” 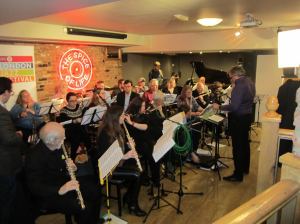 Two others traveled even further. 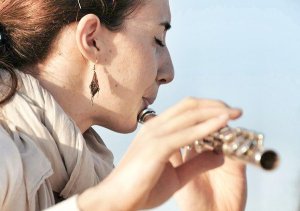 Although currently resident in Birmingham, Martina Biguzzi is originally from Italy where she studied jazz flute with Michele Gori. She played lead alto flute and contributed some fine solos. She and her drummer partner Filippo Radicchi will form the nucleus of the next UK Jazz Flute Big Band in Birmingham.

The other special guest for this evening, Israeli flutist Mattan Klein, has been making an international reputation with a number of critically acclaimed recordings. He contributed an arrangement of his own composition Laximum to the evening’s first set. To begin the second set, he performed another of his arrangements, of George Cables’ Think on Me, written for four flutes plus rhythm. He was joined by flutists Eddie Parker, Paul Cheneour and Jan Steele, pianist Tom Sykes, bass player Adam Dutch and drummer Jonny Dale. 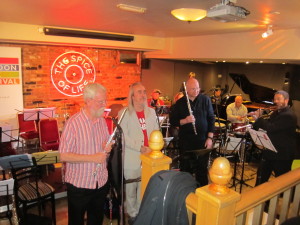 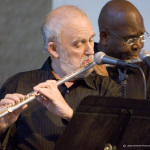 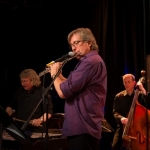 As an added bonus, the solo part on Gagne’s Endearment was taken by Kate Walsh playing the Flute d’Amore, a unique instrument pitched a whole step lower than the concert flute, with a rich dark sound. Kate also gave a short presentation about the instrument and its history.

A lot of people contributed many hours of work and travel to make this evening possible. The Jazz Flute Big Band is still in its infancy in the UK but with contributions such as these it is growing very rapidly. This evening at the Spice of Life both its relative immaturity and its great spirit were on display, although the latter was far more evident than the former. Above all, with more great arrangements arriving every week and an ongoing progamme of rehearsal and performance in different parts of Europe, planned for 2017, there is potential for more great music ahead. 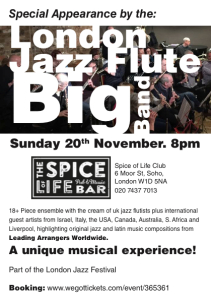 Your Brain on Improv Tips on Doubling by Chris Vadala