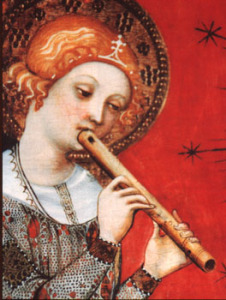 Since our inception, we have been intending to add material about the recorder, its repertoire and the various recorder communities throughout the world.

In the English-speaking world, practitioners and theorists have tended to make a distinction between transverse and end-blown instruments with the definition “flute” being assigned exclusively to the former. Thus it is that the recorder and the flute have their own distinct communities, publications, conventions, etc.

At International Flute Journal, even though we function within the English-speaking world, we do not accept this distinction. There are several reasons:

1. During the Renaissance and Baroque eras, the recorder was the dominant, or at least equal, instrument of the flute family. It has also experienced a major revival since the mid 20th century.

As stated on the Diabolus in Musica website (http://www.diabolus.org/guide/recorder.htm)

William Byrd wrote consort music for recorders, Handel wrote recorder sonatas, Bach used it extensively in his cantatas and chamber music, and it made regular appearances in operas. Until the late eighteenth century, it was regarded as a professional instrument alongside all the others. It’s still played on the professional concert circuit today by some stunningly talented performers, and the idea that it’s a kid’s instrument is an insult.

The introduction of the Baroque recorder to England by a group of French professionals in 1673 popularized the French name for the instrument, “flute douce”, or simply “flute”, a name previously reserved for the transverse instrument. Until about 1695, the names “recorder” and “flute” overlapped, but from 1673 to the late 1720s in England, the word “flute” always meant recorder. In the 1720s, as the transverse flute overtook the recorder in popularity, English adopted the convention already present in other European languages of qualifying the word “flute”, calling the recorder variously the “common flute”, “common English-flute”, or simply “English flute” while the transverse instrument was distinguished as the “German flute” or simply “flute.” Until at least 1765, some writers still used “flute” to mean recorder.

2. With our emphasis on World Music, (as within the National Flute Association in the U.S.A., when I was founding chair of the World Music Committee), by definition, we embraced a whole series of end-blown flutes belonging to various world cultures: the shakuhachi of Japan, the ney of Turkey and Egypt, the pan pipes of Romania, etc. We have begun a series on such instruments here at Flute Journal. For example, watch for an interview with Omar Faruk Tekbilek, master of the ney, material on the pan pipes from Romania, etc.

In light of this, we will be featuring articles, reviews and interviews on the recorder, recorder artists, repertoire, history etc., beginning with a concert review by British recorder virtuoso Piers Adams. In the meantime, our readers could not do better than to enjoy the further beautifully written and illustrated articles at Nicholas S. Lander’s website, The Recorder Home Page