As we prepare to celebrate the 80th birthday of the great Indian flute maestro Hariprasad Chaurasia, it is fitting that we should also feature an artist whose contribution to his own music tradition equals that of Hariji to Hindustani music and who is approaching his 82nd. We will do so by featuring one of his most significant recordings in our new, Classic Recordings Series. 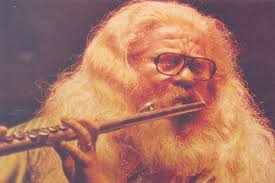 Hermeto Pascoal is one of the most remarkable musicians to emerge from a remarkable music tradition — that of Brazil. The tradition that has created Samba, Choro, frevo, xaxado, forro, Bossa Nova. . . has also created a host of wonderful flutists, many of them relatively unknown outside of Brazil.

Saxophonist and flutist João Theodoro Meirelles, for example, a graduate of the Berkelee School of Music, is credited with the creation of the samba-jazz genre while Hector Costita, also approaching his 80th birthday, is still a force in Brazilian music, teaching and performing in São Paulo. Altamiro Carrilho (1924 – 2012) was a composer and a major representative of the choro  genre who was widely regarded as a master flutist. 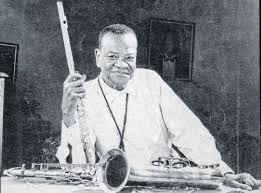 All of these owe a tremendous debt to a figure from an earlier generation. Alfredo da Rocha Viana, Jr., better known as Pixinguinha (1897 – 1973) was also a multi-instrumentalist but, as the  son of  flutist Alfredo da Rocha Viana, began by studying the flute. After extensive experience in chord ensembles within Brazil, Pixinguinha had the opportunity to tour and perform in Europe, including a lengthy residency in Paris in 1921, where he was exposed to jazz and ragtime. Returning to Brazil, where he became leader of the Orquestra Victor Brasileira, developing his skills as composer/arranger. Although widely criticised at times for doing so, Pixinguinha transformed choro by the skilful integration of these external influences.

Currently representing the tradition brilliantly, flutist/pianist/composer Jovino Santos Neto is a member of the Flute Journal Editorial Board, music director of many of Hermeto‘s ensembles and a professor at the Cornish College of the Arts in Seattle. 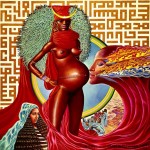 Hermeto Pascoal, however, is both revered in Brazil and a significant name in world music, particularly since his appearance on Miles Davis‘ 1971 recording Live-Evil which featured him on three pieces which he also composed, prompting Davis to refer to Pascoal as “the most impressive musician in the world.” Pascoal would be better known as a flutist, however, if he did not do so much more than play the flute! He is known as a composer, arranger, bandleader as well as multi-instrumentalist. To quote Wikipedia:

“Known as o Bruxo (the Sorcerer), Pascoal often makes music with unconventional objects such as teapots, children’s toys, and animals, as well as keyboards, button accordion, melodica, saxophone, guitar, flute, voice, various brass and folkloric instruments. Perhaps because he grew up in the countryside, he uses nature as a basis for his compositions, as in his Música da Lagoa, in which the musicians burble water and play flutes while immersed in a lagoon: a Brazilian television broadcast from 1999 showed him soloing at one point by singing into a cup with his mouth partially submerged in water. Folk music from rural Brazil is another important influence in his work.” 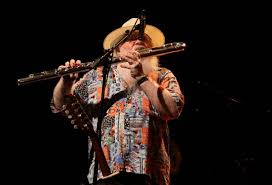 While also an excellent pianist, Pascoal is, however, a remarkably accomplished flutist and one of his earliest recordings is a clear demonstration of this. After appearing on a number of recordings in Brazil, beginning in 1964, Pascoal joined an established group  the Trio Novo (Airto Moreira, Heraldo do Monte and Theo de Barros) and in 1967 the group, renamed Quarteto Novo, released an album that launched the careers not only of Pascoal but also of percussionist Airto Moreira who went on to work extensively with Miles Davis as well as with Airto’s wife, vocalist Flora Purim. Pascoal would then go on to join the multi-faceted group Brazilian Octopus and the rest, as they say, is history with multiple international appearances, recordings and honors, including, recently, an honorary Doctor of Music degree from the New England Conservatory.

The Quartet Novo‘s 1967 album, however, is still one of the finest examples of his flute work. It is here reproduced in its entirety. Given that Hermeto acts as arranger, plays both piano and flute and is composer of two of the pieces, it is still a remarkable contribution to Brazilian flute performance.

The selections are as follows:

And here is the recording. Enjoy!