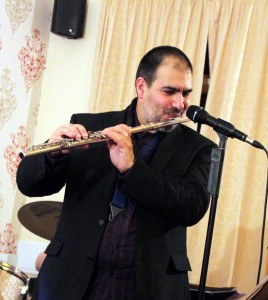 Reviewing Flute Flight‘s appearance at Southport Lancashire’s Royal Clifton Hotel could be construed as inappropriate as this writer is a member of the ensemble. However, on this occasion, the primary focus was not on the flute ensemble but on the flute and saxophone work of one of the UK’s leading music professionals.

Andy Panayi has been a fixture of the UK music scene for a good many years. Saxophonist, flautist, composer, arranger, bandleader, educator, Panayi is highly regarded in both the jazz and classical scenes, in recording studios and orchestra pits. A seasoned educator in addition, he is currently a professor at The Royal College of Music and The Royal Academy of Music in London and the Birmingham Conservatoire.

Equally skilled in performance, composition and arranging, Andy plays all the flutes and all the saxophones and currently leads his own groups, both jazz and classical. He also writes commissioned works and compositions & arrangements for his own ensembles. He has performed and recorded with singers as varied as Shirley Bassey, Jessye Norman, Paul McCartney and Elvis Costello, and worked alongside such artists as Freddie Hubbard, Phil Woods, Wynton Marsalis, Ronnie Scott, the BBC Concert Orchestra, The Moscow City Ballet, John Dankworth & Cleo Laine . . . the list goes on and on (See: www.andypanayi.co.uk). 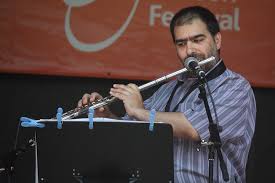 Panayi also finds himself in demand by major artists on tour and is currently part of the live 13-piece orchestra accompanying the popular couple Karen and Kevin Clifton whose dance show is a spin-off from a highly popular UK TV show Strictly Come Dancing. (Through Andy’s good graces my wife and I got to see the show on Friday evening. I can happily confirm that high levels of musicianship and professionalism are alive and well in the UK.)

Finding himself with a free evening in Liverpool, Andy made himself available for a local performance which was organised at the Royal Clifton Hotel in Southport, venue of the annual Southport Jazz Festival. Playing in the sun-drenched Conservatory Room, accompanied by the Tom Sykes’ trio (Sykes, piano, Matt Lawton, bass, Jez Finch, drums) Andy began with a set of jazz standards, demonstrating his mastery of both tenor saxophone and flute — concert and alto. Choosing pieces associated with Dexter Gordon (Cheesecake, Fried Bananas) and Thelonius Monk (Rhythm-a-Ning) as well as classic standards (There is No Greater Love, Body and Soul) he showed his affinity for the muscular approach to the tenor sometimes referred to as Tough Tenors — Dexter, Sonny Rollins, Johnny Griffin, Eddie ‘Lockjaw’ Davis, et. al. and a flute style that owed as much to Herbie Mann as Hubert Laws and Eric Dolphy. Even though this was the summer solstice, he offered Up Jumped Spring which he has actually performed with its composer, Freddie Hubbard. Tom Sykes and his cohorts rose to the occasion with strong, sympathetic support. 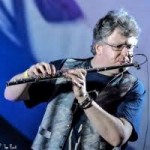 For the second set, Andy welcomed three other flautists to the stand, including this writer, British Flute Society local representative Mark Parkinson and hard-working Liverpool area teacher Gemma Blackburn. Andy is UK music director for the Jazz Flute Big Band (JFBB) so it was fitting for him to be part of the first outing of the Jazz Flute Small Band known as Flute Flight. An offshoot of the JFBB, this ensemble has joined hands with other, similar ensembles, Flutes and The Abstract Truth in New York, 4 Flute Flight in Israel, Four Colors in Tokyo. As the plan is for these and other groups to develop and share repertoire, it was fitting that they performed pieces by Rick Faulkner in New York, Mattan Klein in Israel as well as by Matt Lawton and Tom Sykes. Throughout, Panayi led the way with powerful flute solos while leaving plenty of solo space for the other flautists. Highlight was the last piece of the evening, Mattan Klein‘s arrangement of the Chick Corea classic Armando’s Rumba. 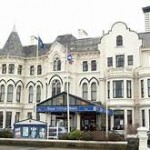 Considering it was a Thursday evening and Southport was bathed in sunlight, it was not a bad crowd at the Royal Clifton although the music demanded much more. In any case, it is clear that while not exactly a closely guarded secret, Andy Panayi deserves to be much better known.