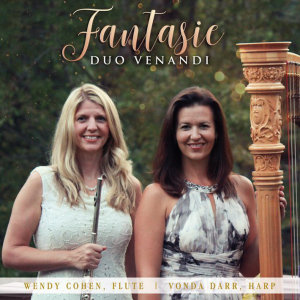 Fantasie was released in 2016 and features a varied programme of music for flute and harp with some old favourites by Saint-Saens, Piazzolla, Rota and Ibert, alongside lesser-known pieces by Henry Cowell, Gareth Farr and Rhonda Larson.

US based artists Wendy Cohen and Vonda Darr have been performing together as principal flautist and harpist of the Symphony Orchestra Augusta for over 15 years, and as a flute and harp duo since 2011. The sense of togetherness and tight ensemble playing is evident throughout the programme, and the musicians complement each other so well with great balance and unity.

The disc opens with the beautiful Fantasie by Saint-Saëns – always a popular choice and played well as it is here on flute instead of the original violin, it comes across every convincingly. The flute’s articulation and attack is spot on, precise and well executed, along with maintaining a rich full sound throughout the range of the instrument. Such elegance and poise is evident here along with a total control of the instrument. 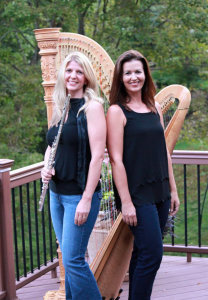 The Sonata for flute and harp by Italian film composer Nino Rota is another stunning substantial three movement piece, in the mainstream repertoire and a would be a centre piece for a recital. The American composer Henry Cowell is among the most innovative of American composers. He is a new composer to me and these charming Two Bits are played with fluency and ease and are a lighter addition to the programme. The New Zealand composer Gareth Farr was born in in 1968 and is also a percussionist. His Taheke is beautiful and ethereal and also new to me and something I will be looking to include in my repertoire. The duo capture its sonorous quality extremely well and it contrasts well with the following rhythmic and fast Lughnasa by American flautist Rhonda Larson. This really is a showcase for the flute and Cohen sails effortlessly through all the articulated passages. The disc ends with Ibert’s popular Entr’acte which ends the programme in a whirlwind and flourish.

An excellent CD, inspiring and captivating with some enchanting different repertoire. 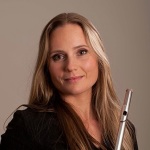 Rachel Smith is a London based professional flute player with many years experience as a soloist, chamber and orchestral musician. She has performed at venues ranging from major concert halls such as the Royal Albert Hall to church weddings and more intimate celebrations.

A version of this review first appeared in The Flutist Quarterly, the member magazine of the National Flute Association, and is used with permission. nfaonline.org.