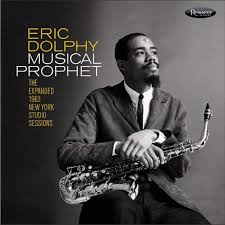 It is impossible to think about the Flute in Jazz without considering Eric Dolphy. This has been reinforced again by the release of a recent recording Eric Dolphy: Musical Prophet, a three-volume set from Resonance Records.

Dolphy passed away in 1964, his early death the tragic result of prejudice and incompetence — being a black jazz musician, his diabetic coma was diagnosed as a drug overdose in a German emergency room so life-saving treatment was not administered. But during his all-too-brief sojourn on Earth — a mere 36 years — 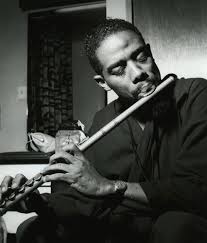 he transformed jazz performance standards. A handful of musicians can claim to have transformed a particular instrument during their career. Eric Dolphy achieved this feat on no fewer than three instruments: the alto saxophone, the bass clarinet and the flute. All of this is evident on this recording.

One result of Dolphy’s versatility, of course, is that he does not play flute on the majority of the tracks of his recordings, frequently, as with these recordings, just one. I distinctly remember his first record, Outward Bound (1960) which I played so much I wore it out. He played flute on one track — Glad To Be Unhappy. But it was stunning. Then Evan Parker and I heard John Coltrane in London in 1961, with Dolphy playing bass clarinet on Naima and flute on My Favourite Things. Evan went off the next day in search of a soprano sax, which was not an easy thing at that time. In my case, arriving at University for my second semester in 1965, I used my government maintenance check to buy a flute. (I already owned a Mark VI alto sax from the first semester!) By the time I toured India in 1969 I played to Glad be Unhappy to all the Indian musicians I met. Then there was Gazzaloni on the Out To Lunch LP. Same again: one flute track, but it was astonishing. In this box set of LPs or CDs there are three flute tracks, Fats Waller’s Jitterbug Waltz on Disc 1, and a second take on Disc 3, and his original  Ode to Charlie Parker on Disc 2. 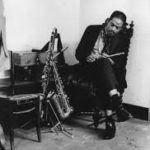 There has been a good deal of discussion about the relative status or importance of each of Dolphy’s instruments, with many critics referring to the flute as his third instrument. The first instrument he recorded on was the alto saxophone, although he probably started on the clarinet, but then when he added the bass clarinet and the flute it led to this speculation about his attitude to woodwind doubling. In the chapter of my book, The Flute in Jazz, I interviewed composer and critic Gunther Schuller who addressed this subject:

As far as the flute goes I would put it this way. He worked for years perfecting his work on the bass clarinet, I know how much he would practice in those days, 8,9,10 hours–he wouldn’t even eat or go to the bathroom. Once he had conquered the bass clarinet, then next he tackled the flute. I like to thing that he worked out things on the flute to the extent that he did on the bass clarinet. One might quibble with that, because there are some who would say that his tone on the flute was a little bit rough compared to say classical flute playing which is very, very pure. But as jazz violinists–say someone like Stuff Smith–played with a rough tone that would never be permitted in a Tchaikovsky violin concerto, so Eric went for this more expressive, gutsy, way of playing the flute. And of course, it was technically amazing. He could get around on that instrument in ways that were really remarkable.

So you would disagree with those who say that his least significant contribution was on the flute?

Well, I suppose you could say that. But if I were to join in on that view I would have to qualify that be saying that that “least” was very little different from what he did on the bass clarinet.  Perhaps not all of those instruments were absolutely equal. But that is irrelevant. The point is that he played the flute remarkably well. Certainly he was one of the early experimenters in getting into the really modern and open free jazz flute playing. 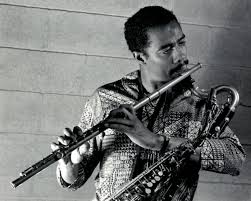 In any case, anyone interested in the flute in jazz, or, indeed, the flute in contemporary music, needs to give some attention to Eric Dolphy, and to do so requires that you take him as a woodwind player, with flute, bass clarinet and alto saxophone equally significant. As saxophonist Joe Lovano told me:

“There have been some amazing musicians in jazz who have doubled on different horns and have said a lot! Dolphy was one of the key musicians who did that and not many cats have come up to his level of execution and ideas on of the three horns that he focused on.”

In spite of this, Gunther Schuller was disappointed with the way Dolphy has been remembered. As he told me:

I am shocked and horrified by how much Eric Dolphy is now forgotten and neglected, particularly in comparison to John Coltrane. It’s almost as if the only two musicians worth talking about any more are Miles Davis and John Coltrane. 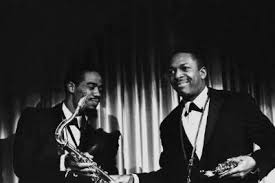 Hopefully, this collection will help to revive Dolphy’s profile among historians. Even if we are primarily interested in his flute work, his whole oeuvre is important, and these titles, according to producer James Newton,  “provides us with sharper images of Dolphy’s compelling sonorities on each of his instruments.” The supporting packaging, rich with multiple essays by fellow musicians and critics, provides us with great insights into Dolphy’s life and work, largely unavailable elsewhere. This makes Eric Dolphy: Musical Prophet a uniquely valuable collection.