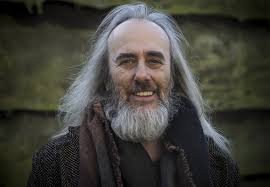 Eddie Parker has been a fixture of the UK jazz scene for many years, one of a handful of flute specialists. Two other such specialists, Gareth Lockrane and Rowland Sutherland now appear with Parker in his ensemble called Eddie Parker’s Debussy Mirrored Ensemble which features his writing, inspired by and derived from the work of Claude Debussy. It is one of several projects which have emerged recently in the UK, in co-operation with the BBC, to celebrate the centenary of Debussy’s death. The group appeared at the Purcell Rooms, part of the Festival Hall complex on London’s South Bank, as part of the London Jazz Festival. Maddy Shaw, herself a flautist and member of the Jazz Flute Big Band-UK, was there. She writes: 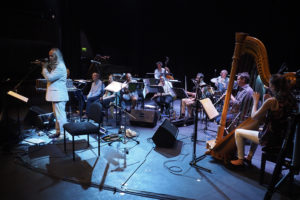 “There is something of a spiritual quality about flutist and composer Eddie Parker this evening.  He stands at the front of the stage in the Southbank’s Purcell Room, dressed in a cream linen suit, his long white hair and beard gently illuminated by the beams of the stage lights behind him.  The leader of these 12 musicians has something to say.  In the quiet of the auditorium before the performance, softly spoken and engaging, he brings us his latest project – the Debussy Mirrored Ensemble.  And if this is a jazz church, the audience in the Purcell Room tonight have rightly come to worship. 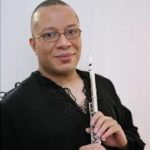 “Parker handpicked this ensemble from the very finest musicians performing at this year’s London Jazz Festival – including Gareth Lockrane, Rowland Sutherland and Jan Hendrickse on flutes/ney, James Allsopp on clarinets, the voices of Brigitte Beraha and James Gilchrist, Alcyona Mick on piano, Imogen Ridge on harp, Simon Limbrick on vibes and percussion, and Loose Tubes mates Martin France on drums and Steve Watts on bass.  Parker himself plays flutes and Moog, and directs.  The confluence of these talents brings us something very special. 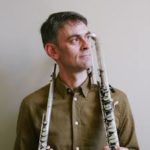 “One hundred years after the death of Debussy, the composer is the inspiration for the project.  Parker takes Debussy’s music and expertly weaves musical ideas from different pieces with his own composition, and with the ensemble’s improvisation, in a process he describes as “compositional transformation”.  The result is an ocean of gloriously shifting genres, harmonies and textures – waves of Debussy rolling through Parker’s exquisite writing. 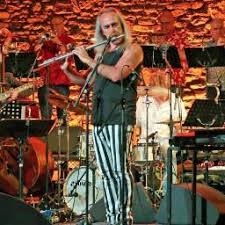 “The concert opens with Anacapris and the soaring voice of Brigitte Beraha conversing melodic phrases with Alcyona Mick on piano.  Behind them, Simon Limbrick on vibes/percussion and the other members of the ensemble with bells and hand-percussion create a sense of space and mysticism – Parker’s “Shangri-La,” as he likes to put it.  The piece changes direction, picking up tempo – as if the mystic smoothly but unexpectedly leads the listener round the corner to a laid-back beach party.

“In De Soir Parker captures the hustle and rush of the city – featuring the extraordinary virtuosity of Gareth Lockrane on piccolo.  Debussy imagined this in the Paris busy busy busy, but those of us who battled the Northern Line (London Underground) to get to the gig can readily identify with it too… 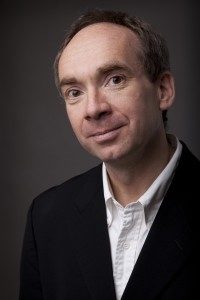 “Il Pleut opens with raindrops of surrealist lyrics from Beraha and Gilchrist.  Then come splashes from the four flutes, harp and piano, a hint of a Birdland riff, before a more insistent, brooding vibe on bass, drums and piano takes over.  Triplet figures circling between the flutes drive us forward into the downpour.  The culmination comes with the voices and front-line instruments in rhythmic unison in a fast-paced finish which Loose Tubes fans will appreciate.

“Al Sarap brings us a Spanish/Moorish feel in 11/8 – the solo from Jan Hendrickse on ney is particularly evocative.  La boîte à joujoux features an impressive free improvisation from James Allsopp on bass clarinet, and a furious pacy drum solo from Martin France at the battle scene of Debussy’s ballet. 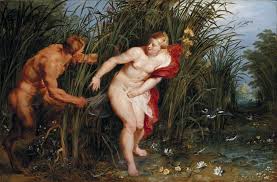 “The jewel in this crown is Parker’s re-working of Syrinx. Parker describes the original piece by Debussy as ‘perfect’, and self-deprecatingly explains he has “mucked about with it a bit”.  But there is no mucking about here.  Parker takes the myth of Pan and Syrinx and reimagines it for the #metoo era.  The eerily whispered, pleading vocals of Beraha, combine with the free improvisation of the four flutes – with breathy exhalations, whistle tones, and a percussive call and response between Rowland Sutherland and Parker on concert and bass flute.  The agony of the pursuit; the desperate escape of Syrinx from Pan, and her transformation into flute form is beautifully given to us, a song captured in glass. 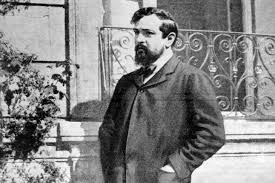 “Although this was the last date of their UK tour, the good news is it is not too late: you can hear them as the Debussy Mirrored Ensemble journey continues.”

[Editor’s note: This concert was broadcast on BBC 3 on Friday 23rd November at 19.30. It will be available for replay for 28 days through December 23rd on the online BBC-IPlayer service. A kickstarter campaign has already raised more than half of the money needed to record the ensemble, and is welcoming further contributions.  More details of the project and the kickstarter campaign will appear shortly. For immediate details go to the Debussy Mirrored Ensemble website. 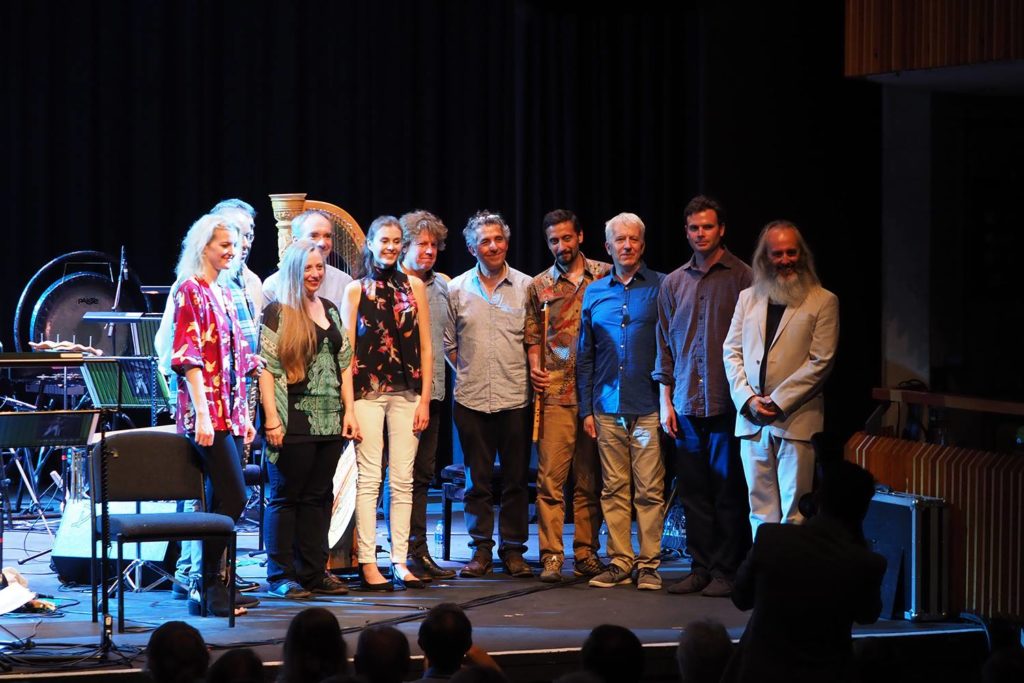 Maddy Shaw is a flutist working in London with a particular interest in jazz flute and improvisation.  Maddy worked as a barrister for many years before changing career to concentrate on developing as a musician.  She recently graduated from Guildhall School of Music, and is the founder, director and band leader of the Girl Plays Jazz Project introducing girls and young women to jazz improvisation.”