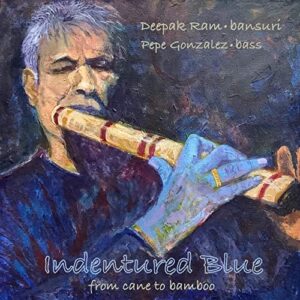 It is fitting that we should review two of Deepak Ram’s recent recordings at the same time as, in addition to the mastery of Hindustani classical music demonstrated in Confluence, he is noted for his highly successful, and always interesting excursions into other genres.

Deepak grew up in South Africa in a home where he was exposed to Indian classical and Bollywood film music, jazz and pop. In a National Public Radio interview he remembered: ” …as a kid growing up I loved all of it. Any kind of music, even marching bands, I would get goose pimples when I listened to them. I remember my brother making me my first flute from a drainpipe, you know, a heavy steel pipe. And he found a drill, and he arbitrarily just drilled 6 holes in the drainpipe. That was my first flute. It was fine. The sound itself was just, you know…”

After some time Deepak discovered the bansuri and that was it. He dropped out of high school and went to Mumbai, “. . . and for 25 years I immersed myself into the study of Indian classical music, before journeying into jazz and western classical.” 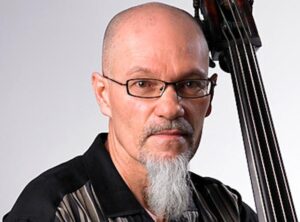 As mentioned in the review of Confluence, Deepak can be heard playing John Coltrane’s Impressions at the beginning of my Flute in Jazz trailer. Indentured Blue reflects that love of jazz, initially instilled by his early studies with Darius Brubeck, while referring to the status of Deepak‘s great-grandparents as indentured servants (slaves?) in South Africa. And just as he is fortunate in living near a fine tabla player in Enayet Hossain, Deepak is also blessed by his association with bass player Pepe Gonzalez whose quality I was able to witness at close quarters when we worked together in Washington D.C.

“Pepe was the first Jazz musician I met when I moved to DC.” he told NPR. “He was born in Spain but came to DC as a child He is sensitive as a person and musician, and we connect well on many levels.  We never rehearse before gigs, and only an hour rehearsal before this recording …..I love bass behind me, more than piano or guitar, because it leaves open spaces, while still keeping the changes. Pepe also listens a lot to my recordings of Indian classical music, and he provides the space and breath needed for a bamboo flute.”

Together Deepak and Pepe, functioning as a duo, tackle four jazz standards, Miles Davis’ All Blues, Naima, Equinox and A Love Supreme by John Coltrane, along with four original compositions of Deepak’s. 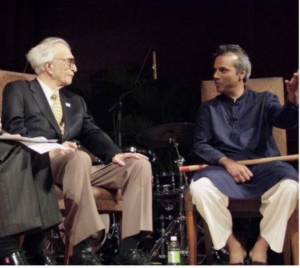 It is a unique sound — perhaps an acquired taste. It is certainly unlike most jazz. The bansuri does not allow for too much modulation so running changes is not Deepak’s approach; this is not bebop. The selections are essentially modal in nature, along with a very open, simplified  blues form in the title track, allowing Deepak’s sensually ornamented lines to float over Pepe’s rock solid bass, largely free from harmonic constraints. The result is quite unique, a kind of exotic, bluesy fusion that not so much breaks down boundaries as eases by them.

It always seemed to me that the jazz musicians were playing at home and the Indians were on unfamiliar turf, with the result that much of the subtlety of Hindustani music is sacrificed. Deepak Ram and Pepe Gonzalez have moved a little closer to a level playing field. We look forward to future directions.