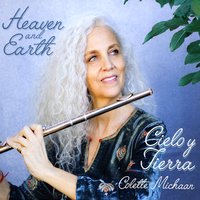 This is the fourth recording by New York-based flutist Colette Michaan, following her critically-acclaimed CD Incarnate-Encarna which we reviewed at Flute Journal July 2016.

Colette holds a unique position among New York flutists, both regarding her background and her focus. A first generation American of Egyptian/Syrian heritage, Michaan has pursued her interests from a world music perspective, having explored music traditions from Africa and South America. And yet one tradition has captured her heart and her imagination to the point where all of her recordings have been devoted to it. This is the music of Cuba. 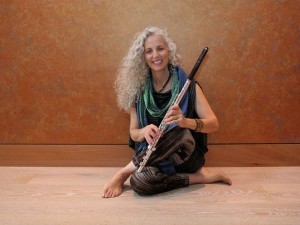 Colette is by no means the first non-Cuban artist to be seduced by Charanga — Toronto-based flutist Jane Bunnett comes to mind, along with Mark Weinstein in New York, Fay Roberts in Los Angeles, Sue Miller and Janet Sherbourne in the UK. What is the appeal? Something magical, it seems. Any genre that manages to achieve a balance of elements becomes something established, or “classic,” Baroque, classical, bebop, Hindustani, Carnatic . . . There are many such genres that come under the heading of “Latin” music, or even “Latin” Jazz, particularly from Brazil. And yet charanga seems to have some special magic. In her notes to Heaven and Earth Michaan tells us:

I’ve always been cross cultural in my origins, history, identity, relations and resonances. My heritage is Egyptian, Syrian, Jewish. I was born in New York City, where I have always lived. When I hear most Cuban music, I want to dive into into it with all of my being. From my first exposure to it many decades ago I followed its call.  Beyond the obvious call  magnetism of its beauty, energy, rhythms and groove I continued to wonder from where this desire to immerse myself in it came.

. . . for years I sometimes felt fraudulent focusing on learning how to play music from a culture that I was not born into.  Over time, I’ve come to know without a doubt, that this music awakened my cellular memory. Both New York and Cuba are crossroads for global migration. This music called me across oceans to draw a full circle where African, Arab, Spanish, Caribbean and the warmth of tropical cultures meet: in Cuba and in me.”

What I take from this is simple: issues of authenticity — moot at best — are irrelevant. As a musicologist you can lose sight of that. What Colette Michaan presents is the essence of Cuban music. As she puts it: “This music is my response to the passions and pains of life. The language is Latin Jazz. The rhythms are Afro-Cuban. The soul is universal.”

In light of this the only questions are: a) what is the essence of Cuban music? And b) has she captured it?

My answer is: a) Joyousness b) Absolutely. 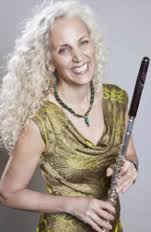 Michaan has gathered together some of New York’s finest charanga artists to perform a varied set of Cuban compositions. It is a joyful set, devoted to the work of eight different composers and three arrangers, in addition to Colette herself. And, of course, there is her flute, floating above the ensemble in the manner of charanga flute yet, somehow, without the shrillness that creeps into some players’ sound in the third octave range where most Cuban flutists spend much of their time. And having just commented on the rarity of the flute/trombone combination in my recent review of James Hall/Jamie Baum, here we have just such a combination at its very best — a lovely contrast between the high flying flute and the gruff trombone solos either by Regev or Alejandre, we are not told which.

There are really two possible responses to a recording such as this: getting analytical, or getting on the dance floor. I would recommend the latter.