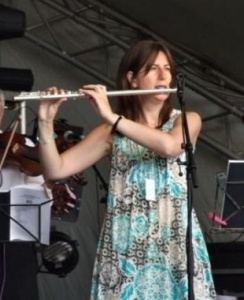 Charanga del Norte, are a 10 to 14-piece band based in the UK – they play Charanga típica styles of Cuban dance music such as Mambo, Chachachá, Danzón and Pachanga as well as Son and Son Montuno dance styles. The band, which celebrates its 20th anniversary in 2018, was founded by Sue Miller, (left) author of Cuban Flute Style: Interpretation and Improvisation. The inspiration for the band came from Orquesta Aragón and Israel ‘Cachao’ Lopez and the story of the band can be found in the preface to Miller’s book as well as on her website, on the history page. You can also hear the band on mp3 on the recordings page and see the band in action via the clips on the video page.

To celebrate their 20th anniversary, Charanga del Norte are working on a new recording, in the run up to which they have issued two of the selections on an EP. Details can be seen on their new website.

We will be following the progress of the project and reporting back to Flute Journal readers.