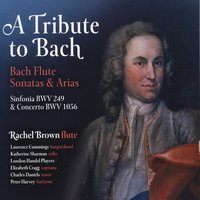 It has taken far too long to prepare this review but my procrastination has been occasioned by the sheer scope and beauty of this recording. I received this double CD just prior to meeting Rachel Brown and hearing her perform the Quantz A Major Concerto with the London Handel Players at London’s Wigmore Hall in April. My first response to both the concert and the recording has been a kind of awe that has persisted for several months, not only of Ms. Brown’s artistry but of the depth and power of the Baroque repertoire in general and J.S. Bach in particular.

No-one needs convincing about the genius of J.S. Bach, and no performer of his flute music can doubt its importance to the repertoire, but this collection can only reinforce that impression. 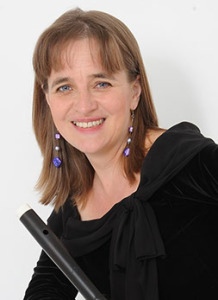 Rachel Brown is the undisputed doyen of Baroque flute artists in the United Kingdom, probably in the world, not only as a performer but also as a historian and practicing musicologist. Her “. . . pure, silky smooth and wonderfully expressive flute sound” (Göttinger Tageblatt, 2013) is backed up by a deep knowledge of the Baroque repertoire that has resulted in acclaimed recordings of the Telemann Fantasias and sonatas and concertos by JS, CPE and JC Bach, Handel, Quantz and Leclair. Here it manifests as the detailed notes (and translations) that accompany this recording as well as her reconstruction of the A Major Sonata (BWV 1032) and her arrangement of the A Minor Concerto (BWV 1056) that make up a significant part of it. In addition, her inclusion of the flute solos from the Easter Oratorio and from several cantatas, as well as Bach’s transcription of the Vivaldi violin concerto, greatly expands our awareness of the J.S. Bach flute repertoire beyond the sonatas and partitas normally presented in such collections. [Flute students who resist music history classes take note!]

Needless to say, these are consistently beautiful and most welcome additions to our awareness of the scope of Bach’s writing for flute. In her program notes, (which can be downloaded at: www.cdbaby.com/cd/rachelbrown2) Brown reveals the source of her inspiration. Referring to Bach as “. . . one of the greatest composers and perhaps one of the greatest geniuses of all time” she notes that “. . . it is his ability to touch the heart and stir the soul which makes his music so inspirational.” She continues:

The inspiration for this disc stemmed from my sheer wonder at Johann Sebastian Bach’s rich and hugely varied compositions for the flute and from a deep and ever-growing respect for the unquestionably admirable flautists who performed for him and inspired him to write in such new and both technically and expressively demanding ways. She goes on to mention one of his older brothers, Johann Jakob, and his third son, Johann Gottfried Bernhard, who were both flautists, but concludes that while it is not known for whom Bach composed his flute sonatas, etc.:

. . . almost more than any other composer, including flautist-composers, Bach seems to have understood the innate qualities of the flute . . . using it to its fullest capabilities and pushing it up to and beyond any hitherto known boundaries of its technique, but all for greatest poignant rhetorical and dramatic effect.

What remains to point out is that, driven by her wonder of Bach’s achievement, and supported by the depth of her performance capabilities (as well as those of her accompanists), Rachel Brown has produced a recording that more than meets the challenge of this repertoire and belongs in the collections of every music library and every serious flute artist. CD Review: Rachel Smith – Summer Was In August Benefits of the Feldenkrais® Method for Flautists