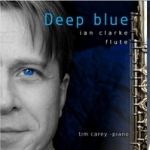 British flutist Ian Clarke, currently professor of flute at London’s Guildhall School of Music, is also well known in the United States, having appeared at the National Flute Association convention in Dallas in 2001–his international debut– and again in 2003 in San Diego. His second album, Deep Blue, is another remarkable recording from a remarkable musician. This is not a new recording; it was released in 2013. But it remains the most current recording of a remarkable artist who has released sheet music of several of his original compositions which appear on the CD. It is for this reason that I have reproduced the review from the now defunct Flute Focus.

Clarke would qualify as remarkable purely for his flute performance, possessing a huge sound and flawless execution that effortlessly incorporates extended techniques as needed. It is an approach that is perfectly matched to his material which consists entirely of original compositions by Clarke himself, who is also a remarkable composer. Many of his pieces have entered the standard repertoire, aided by meticulously prepared sheet music available from his website: www.ianclarke.net. Students in particular benefit from this, as Clarke is also a remarkable educator. 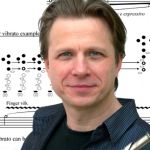 Given the impeccable execution of this material by Clarke and pianist Tim Carey (including some intricate overdubbing on Curves with Clarke playing all three flute parts), the focus turns to the compositions themselves. What is remarkable about these is the genre: Clarke has created a sound world which is entirely his own, one which hovers intriguingly between several different genres. While his recordings are classified as ‘classical’—this recording reached number eight in the UK classical charts in 2013, the first album of original flute music to reach the top 10—that designation is of even less use here than usual. They do have a jazz sensibility at times, although they are certainly not jazz–there is no improvisation here. They should probably be called ‘contemporary’ music, but Clarke’s work is very different from much of that genre. It is almost entirely tonal, if quite chromatic and/or coloristic in places, and the extended techniques are always subservient to the overall musical purpose. The result is that Clarke’s sound world avoids the trap of being locked into the one-dimensional affect characteristic of much contemporary music. A case in point, the opening track Deep Blue combines subtle manipulation of intonation with a sensibility that hovers between a timeless universality and a pop ballad.

All these pieces are full of color and movement, programmatic to some degree–though not as much as The Great Train Race from Clarke’s first CD–and possessing an engaging freshness. Of course, this is only his second recording, and it remains to be seen if he can retain that quality after his tenth or twentieth. So far the signs are very promising.   Peter Westbrook

Peter Westbrook, Ph.D. is editor-in-Chief of Flute Journal.
This review first appeared at the now defunct Flute Focus and subsequently in Flutist Quarterly and is used by permission