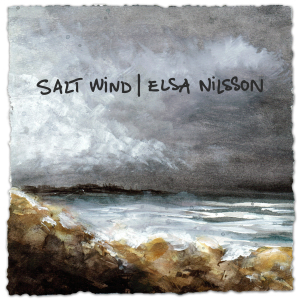 Many instrumental genres feature different schools of performance, such as the French school of flute playing, following Claude-Paul Taffanel. or the Russian flute school after Vladimir Tsybin. Even in jazz’ short history we find the Lester Young and Coleman Hawkins schools of tenor saxophone performance, for example. When it comes to the flute in jazz, however, while great players such as Hubert Laws, Rahsaan Roland Kirk, James Newton, etc. have left their mark on the techniques adopted by jazz players, there are still about as many schools of jazz flute as there are jazz flutists.

Having said that, what does it mean to say that Elsa Nilsson is a unique voice in the field of jazz flute? There have been a lot of influences on jazz flutists, many from world music, particularly as it refers to jazz’s “first fusion” — Latin jazz, as flutists have readily assimilated influences from Brazil, Cuba, Argentina etc. Alternatively, players such as John Wubbenhorst and Deepak Ram have brought the sound of the Indian bansuri into jazz. In Elsa’s case, however, she has brought together influences from more unusual sources. 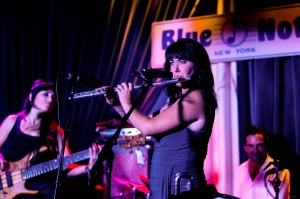 As stated in her website bio,  Elsa “. . . believes the true beauty of music is its ability to create common ground, and she weaves all kinds of folk music (including jazz) to find a deeper understanding between people and cultures.” In her case, growing up in Sweden and assimilating Swedish folk music created a foundation, to which she added a passion for jazz acquired after moving to the United States. But these days, as we have noted, jazz is a multi-faceted genre, and immersion in jazz opens the door to many other influences. Elsa has embraced all of this in her development as an artist while retaining a very personal perspective. Referring to her new recording, Salt Wind, she writes that: “. . . it draws from all the influences I treasure including jazz, rock, Swedish traditional music, Bulgarian, Brazilian, African, and Syrian melodies and grooves.” As she points out, however, “My intention was not to try to create an authentic example of any of these styles, but rather to be genuinely and openly influenced by them and express them in my own way.” 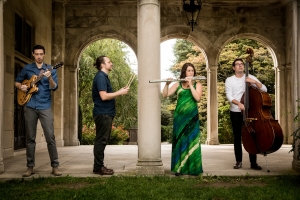 Elsa goes on to succinctly describe the essence of the music on this recording and the wealth of diverse influences on her playing.  As she describes them, each selection reflects aspects of Elsa’s personal experience, both musical and personal, from the Swedish Christmas song Staffans Visan to Continuum which came to her while biking around Brooklyn. Byssan Lull draws on a melody Elsa has encountered in several different settings, from Ukranian Punk Jazz to, again, Swedish folk music. Shift reflects the complex rhythms of Bulgarian wedding music – shades of 17/8 – while Lucia blends a Swedish melody with Syrian rhythms. As a change of pace, Nilsson displays her vocal prowess on Hedning which is a kind of Swedish heavy metal.

While these insights demonstrate the musicological background to Nilsson’s work they are by no means necessary for the pure enjoyment of the music which combines lightness and strength in a most appealing manner. Adding to the strength is guitarist Jeff McLaughlin who contributes some of the more muscular, jazz-centered playing to the date. The rhythm section, bassist Alex Minier and drummer Cody Rahn provide support of great sensitivity, following Nilsson and McLaughlin sure-footedly through every facet of the music.

Along with the breadth of conception and facility of execution, as an example of some of the areas jazz flute music can inhabit, this recording is essential listening.