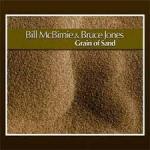 Bill McBirnie has established himself internationally as a leading jazz and Latin flutist even though he rarely travels outside of Toronto, Canada, where he has won a number of domestic awards, while his position as resident Jazz Flute Specialist at Sir James Galway’s official web site has extended his reputation more widely. His appearance at various conventions as soloist, masterclass participant and Jazz Flute Big Band member has also brought him more attention.

I have most of McBirnie’s recordings and I reviewed his last CD Find Your Place for a variety of publications. I have always admired his great technical facility, as well as his harmonic and melodic clarity, while his seemingly effortless inventiveness has extended to the constantly changing musical contexts he has created for his improvisations: piano duos and trios, quartets (flute, piano, bass, drums) and, most recently, an organ trio (flute, Hammond organ, drums.) For A Grain of Sand, his seventh recording, McBirnie returns to a format he used on his debut album Desvio. Here, as in 1998, he partners with singer-songwriter Bruce Jones who provides not only vocal work but also his composition and production skills, laying down a variety of settings for McBirnie’s flute, shifting moods and soundscapes through which McBirnie swoops and soars with his trademark mix of bebop and Latin jazz phrasing. The settings range from sambas, reflecting Jones’ Brazilian upbringing — he grew up near Sao Paul where he studied at the Academia Paulista de Musica — as well as rock, Portuguese Fado and other folkloric elements that he has integrated into a very personal mode of expression. 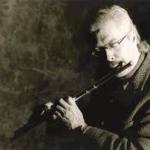 It seems redundant to discuss the overall feeling of a CD these days, when most consumers sample and purchase music tune by tune, at $0.99 a track. There is no particular program suggested in the sequence of tunes on this CD, and I actually enjoyed sampling the pieces alternating with cuts from other McBirnie albums, which may be a good way to go for those seeking a good cross-section of McBirnie’s output. His work holds up in all contexts, however, although I have to admit to a preference to hearing him in a straight-ahead setting with a jazz rhythm section. But the common denominator is McBirnie’s flute and alto flute work and I can certainly understand its appeal in this setting. It will be intriguing to see what he comes up with next.

Review by Peter Westbrook. Adapted from a review that previously appeared in Flutist Quarterly and used by permission.