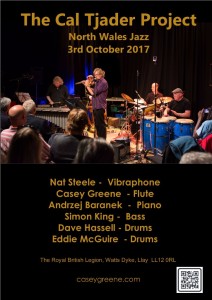 For many years, Downbeat Magazine, in their annual Critics’ Poll, have included the category, Talent Deserving of Wider Recognition (TDWR.) I doubt there could be anyone more deserving of this title than Australian flutist/saxophonist/composer/bandleader Casey Greene. And there could hardly be a a more remote location for a jazz concert than the Royal British Legion Hall in Llay, North Wales. Having driven 50+ miles from the Liverpool area to hear Casey’s Cal Tjader Project quintet at this location, I was not surprised at the quality of the evening’s music — I have heard and worked with Casey on several occasions — but, having to go to such lengths to hear great music, compared with the dross on display at huge pop festivals, I was struck by the predicament of jazz in the 21st century. Nevertheless, it was an excellent performance by a band who could hold their own in any context. 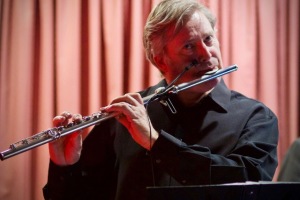 Originally from Sydney, Australia, where he studied under the legendary Don Burrows at the Sidney Conservatory, graduating with a degree in jazz studies, Greene emigrated to the UK in 2004. Since then he has been based in the charming but decidedly provincial town of Shrewsbury a few miles from the Welsh border, but within easy reach of London and Birmingham. There he has built a career with a series of groups from solo and duo to an eight-piece band. He is now also a valued member of Jazz Flute Big Band International, out of London, England, having helped to build and lead the group with several fine arrangements in the group’s repertoire.

One of Greene’s more interesting ensembles is a tribute group to a great Latin jazz artist, percussionist and vibraphonist Cal Tjader. After working with Dave Brubeck and George Shearing in his early years, Tjader was introduced to Latin jazz in New York where he heard Machito, Chico O’Farrill, and Tito Puente’s orchestra with Mongo Santamaría and Willie Bobo. He formed his own group which, benefiting from the 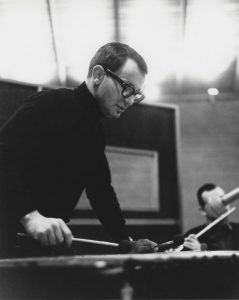 Mambo craze of the late 1950s, quickly became popular, particularly on the US West Coast, leading to a string of recordings featuring some prominent sidemen, including Vince Guaraldi, Donald Byrd, Lalo Schifrin, Anita O’Day, Willie Bobo, Armando Peraza, Chick Corea, Clare Fischer, Jimmy Heath, Kenny Burrell, and flutist Paul Horn. His Soul Sauce album, recorded in 1964, sold over 100,000 copies and helped establish what came to be known as salsa as a major genre of Latin music. With over 70 albums to his credit Tjader built a glowing reputation as soloist and bandleader, as well as the only non-Latino star of Latin music.

In tribute to Cal Trader, Casey Greene has formed a six-piece group featuring top-class vibraphonist Paul Sawtell and a highly-charged rhythm section of pianist Andrzej Baranek, bassist Simon King drummer Dave Hassell and percussionist Eddie McGuire. On this occasion, Sawtell was not available so another fine vibraphonist, Nat Steele, drove up from London to fill in. He fit in perfectly to an otherwise tightly rehearsed ensemble. Benefitting from a well-balanced sound system, some beautifully crafted arrangements and deft direction — all courtesy of Greene’s meticulous approach — the group worked through two sets of material associated with the Cal Tjader sound. Melodic, highly propulsive but not overwhelmed by the two percussionists — three when Greene was not soloing — each piece benefited from Greene’s crisp flute, Steele’s incisive vibraphone, Baranek’s exotic piano and King’s fleet electric bass. 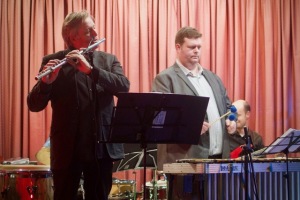 The selections we heard from Greene et. al. reminded us of the scope of the Latin jazz repertoire, particularly as presented by Cal Trader — the opener of each set, Guarchi Guaro and Cuchy Frito Man, are Cha Cha Chas, Cuban Fantasy a mambo, Souled Out a fast bossa nova and several items are classified as salsa (even though TitoPuente insisted that salsa is a condiment!) It was also evident that much of Tjader’s repertoire was contributed by some very well-known jazz artists — Moanin’ was by Bobby Timmons, Morning by Clare Fischer, Afro Blue by Mongo Santamaria and Oran by Chick Corea.

If this opening night is anything to go by, the quality level of this season’s program at North Wales Jazz will be extraordinary. You can review it here. How they pull it off I do not know, but it seems the Arts Council of Wales is involved. Kudos to them as well as to NWJ President Martin Taylor and director Maureen Hopkins.

As for Casey Greene and the Cal Tjader Project, I hope a recording appears soon as they are too good to be just a local group, wherever they might perform.

For more on Casey Greene