Alan Hovhaness, Suite for Flute and Guitar
October 30, 2020 (No Comments) by Ganved14
[Editor’s Note: As your editor I may occasionally allow myself to exhibit my own preferences and, as I am an advisor to the Alan Hovhaness Archive in Terevan, Armenia I have a certain obligation to promote his work. Along these lines, I am planning a feature on his compositions for the flute. Having come across the following video I am presenting it as a precursor to this forthcoming feature. We are also reprinting my interview with Hovhaness from 1982.] 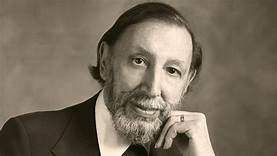 American composer Alan Hovhaness (1911-2000) was one of the most remarkable and prolific composers of the 20th century with his official catalog comprising 67 numbered symphonies and 434 opus numbers. Captivated by the various musical traditions of the world, Hovhaness was the recipient of many grants and scholarships (Guggenheim, Fullbright, Rockefeller) to study abroad – making him one of the first western composers to do so and perhaps our first true “world music” composer. The exoticism of Hovhaness’ music is clearly conveyed in the Suite for Flute and Guitar, with an eclectic array of melodies that seem to span the entire globe of musical traditions.